Smartphone as Mentor: How tech could change behavior

EECS: Electrical and Computer Engineering
January 9, 2014
What if smartphones could act as mentors in mindfulness?| Medium Read
Enlarge

Funneling a steady stream of diversions straight to your pocket, smartphones are often cast as the ultimate distractors. But a University of Michigan engineering professor sees potential for them to be something quite the opposite.

What if they could act as mentors in mindfulness, helping users stay attentive in order to achieve particular goals?

That’s the challenge Jasprit Singh, a professor of electrical engineering and computer science, put before students this semester. In a course called Imagine, Innovate, Act! students from engineering, art, music, health fields and a variety of other backgrounds designed mobile apps to help users set and meet wellness milestones. The definition of “wellness” was broad, encompassing creativity and learning in addition to physical and mental health.

Singh, who grew up in New Delhi, is an applied physicist who works on semiconductor devices for high-powered RADAR, electric vehicles, smart grids and solid-state lighting. He is also a yoga devotee and instructor with studios in Ann Arbor and Santa Barbara. This course, in a sense, bridged his disparate disciplines.

“In our culture today, we often don’t have scarcity of food or gadgets or knowledge. The scarcity has shifted to mindfulness,” Singh said. “We may know we should do something, but we are not always able to do it. The goal of this course was to bring harmony between what we know and what we do.”

Humans forget. Under stress, we can fail to take the steps we intend to, Singh says. But smartphones don’t operate that way.

“And there are a billion of them in use today worldwide,” he continued. “They could deliver reminder technologies, or they could observe, teach, anticipate, or help users perform best practices on a regular basis.”

The apps the students developed in this first class focused on delivering messages to users at a set time or place. An app called Balance, targeted to senior citizens, offers easy and routine access to short exercise videos that could improve coordination and prevent falls. WeeAddition guides women through pregnancy. Joggle is a collaborative art, poetry and music app that could encourage creativity.

“Technology can be a great behavior changer.”

And College Granny aimed to help students balance studying and socializing and develop healthy habits in both parts of their lives. The user can set the app to remind him or her at appropriate times to go to sleep, take a study break, or quit after just one game of beer pong, for example. The reminders are more than words on a screen. They’re one-frame comics – “nonconfrontational” messages delivered by a costumed college student in a curly gray wig.

“The app would be able to have a constant, almost living presence in the user’s life, and could thus help them form their decisions even more than if it were just a browsing app,” said Diana Sussman, a master’s student studying music composition in the School of Music, Theatre and Dance. “Also, we want to make it connected to a social network so that users can comment about their interaction with Granny, making it a collaborative effort, perhaps giving students some real pressure to make healthy habits because others are watching them.”

The team plans to continue working on the app and potentially make it available to the public, as does the group that developed Joggle.

“I think the course changed the way I view technology,” said Daniel Lao, a computer science and engineering major. “Before, I had the impression that technology was more geared towards solving physical problems. From this, I realized that it could have just as large of an impact on mental and psychological issues.”

Singh sees the class as the beginning of a new platform. He’s not the first to envision these beneficial uses of smartphones – wellness apps are popular downloads already. He thinks the concept could turn into something bigger because of the do-it-yourself app program that Singh created with John Hinckley, an adjunct research scientist in electrical engineering and computer science. The template aimed to give students a head start on coding. Eventually, Singh says, it could lower the barriers for this type of software development and enable anyone to make a custom tool.

“We believe it’s unique in that that it offers the ability to make multimedia content and a basic, but fully functioning app without traditional coding skills,” Hinckley said. “We’re not aware of anything like it.”

The app template lets creators develop apps that push content to users at specific points in time or space. These apps greet users, give them options to view content or reschedule, and also lets them give feedback. Singh envisions uses in fields including medicine and education. Doctors and nurses could use it to monitor patients or encourage them to stick to recommendations. Foreign language teachers and students could use it to provide a stream of vocabulary that could help users based on where they are.

“Technology,” Singh said, “can be a great behavior changer.” 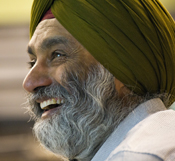 Additional Photos from the Class