Civil and Environmental Engineering
January 24, 2014
The annual Frank E. Richart Jr. lecture is named in honor of Professor Richart, whose long and distinguished career was highlighted by excellence in teaching, research and service to the University of Michigan.| Medium Read
Enlarge 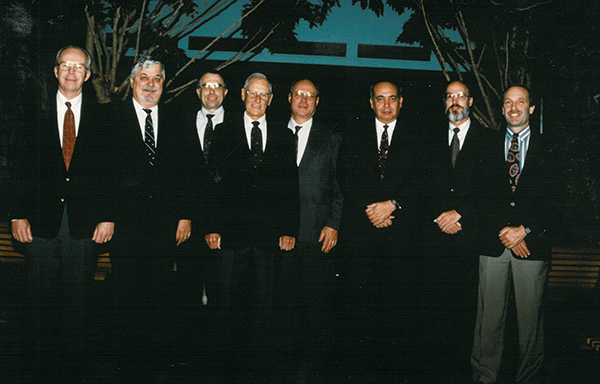 IMAGE:  Richart is fourth from the left.

Following discharge in 1945, he returned to the University of Illinois and completed his PhD in Civil Engineering in 1948. During those years he was Men’s Twin City Golf Champion five times.

Once he finished his PhD, Richart was offered a position at Harvard. His father encouraged him to take it so the young Richart could work with Professor Harold Malcolm Westergaard, who was well known for his research on theoretical and applied mechanics. The younger Richart took his father’s advice, but shortly after starting at Harvard, Westergaard passed away.

Stuck in Massachusetts without a mentor, Richart was fortunate that Professor Karl von Terzaghi, widely considered the “father of soil mechanics,” stepped in and took him under his wing.

Terzaghi, a visiting professor at Harvard, the University of Illinois and MIT, had been approached by the U.S. government about working on the Distant Early Warning (DEW) line, a series of radar stations starting in the Arctic used to detect incoming Soviet bombers during the Cold War. He directed Richart to study foundation dynamics to learn how to stabilize the DEW antennas.

This was a huge step in Richart’s career. His work on the DEW line designs was later applied to the design of Texas Towers for both offshore tracking towers and oil exploration. The current state of the art in design of foundations to accommodate dynamic forces including earthquake shaking is heavily based on the methods developed by Richart.

Richart was one of the first to recognize that soils behave differently under cyclic and dynamic loads than under static loads, and he initiated research in the 1950s to define this behavior. The response of soils to cyclic loads plays a role in the effects of wave forces on structures in the marine environment, the resistance of foundations to earthquake shaking, and the behavior of foundations for sensitive instruments and vibrating machinery.

To measure appropriate soil parameters, he directed the development of both laboratory and field testing apparatus and techniques. He guided the development of the resonant column and cyclic torsional shear apparatus, which have become standard equipment for the laboratory, and the adaption of seismic crosshole and seismic surface wave techniques for in situ measurement of soil properties.

In 1952 Richart left Harvard for the University of Florida, where he worked for ten years – starting as an associate professor and later gaining full professorship. While in Florida, Richart taught the first college course fully devoted to soil dynamics.

Richart’s contributions to the fields of foundation engineering and soil dynamics continued to be leading edge when he joined the University of Michigan.

In 1970 he co-authored the world-renowned textbook Vibrations of Soils and Foundations with former students J.R. Hall and R. D. Woods. This textbook remains the basis for most courses in soil dynamics and has been translated into Japanese, Chinese and Romanian.

Among many distinctions, Professor Richart was awarded the Terzaghi Lecture Award—the highest ASCE award in his discipline—and was elevated to the level of Honorary Member of that organization as well. In addition, Professor Richart’s achievements were recognized by election to the National Academy of Engineering. During his golfing career, he was Barton Hills Men’s Golf Champion, Ann Arbor City Champion and State of Michigan Senior Champion.

Bill Richart is honored and remembered as a friend of students, a consummate engineer, an outstanding professor and colleague—and as a gentleman.