EECS: Electrical and Computer Engineering
January 29, 2014
Glyph is a wearable mobile personal theater and is the first head-mounted display coming to market that will have a virtual retinal display.| Short Read
Enlarge 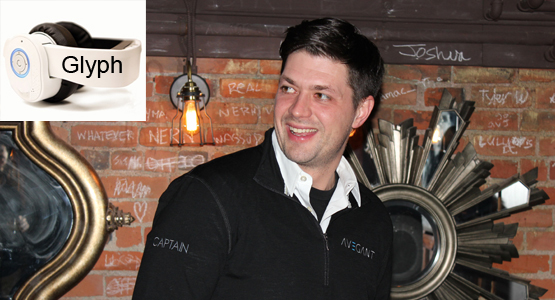 IMAGE:  “With my background in medical devices, I started to look at how we actually see. The Glyph mimics natural vision.” Allan Evans (pictured at the Kickstarter party in downtown Ann Arbor)

Dr. Allan Evans (MSE PhD EE ’07 ’10) is on the verge of changing the way we experience media. Allan is CTO and co-founder of Avegant, an Ann Arbor startup in the middle of a successful Kickstarter campaign to fund the next stage of production on their breakout entry into consumer electronics with the Glyph. Glyph is a wearable mobile personal theater with built-in premium audio, and it is the first head-mounted display coming to market that will have a virtual retinal display (VRD).

It took just four hours into the Kickstarter for the company to meet its minimum funding threshold, a feat noted by many major news outlets, from PC Magazine to the BBC News. So far, advance purchases of the Glyph have netted the company $820K+, and enabled the company to move forward with their goal of releasing a beta version of the product by the end of the year.

There’s a reason the Glyph is eagerly anticipated by techies worldwide, and it has to do with its VRD, developed by Dr. Evans. With this technology, there’s no screen, no LCDs, no OLEDs, no emissive panels at all. Instead, the images are generated from reflected light, which mimics how we see the world around us. 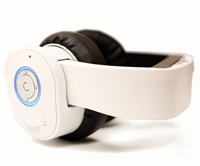 IMAGE:  While helping individuals try on the Glyph at the Kickstarter party, Allan and Ed explained that the company will continue to refine the headset to make it as comfortable as possible. When asked how one user liked the device, she said, “Amazing. I want to keep playing the game!”

Each eye piece incorporates a million micromirrors to provide a viewing experience that tech reviewers say is extraordinarily sharp and vivid – whether watching an HD movie or streaming a low quality video from a smart phone. And because the light that reaches the eyes is reflected  and not direct, thanks to the micromirror array, users can comfortably watch movies or play their favorite video game all day long.

Dr. Evans said the Glyph’s 45-degree field-of-view creates an immersive experience while maintaining the user’s peripheral vision.  Because of this feature, “you can now perform private computing in public spaces.”  The flip-down headset features high quality noise-cancelling audio as well.

The idea for a virtual retinal display first germinated while Allan was working on a project for the military at Pacific Northwest National Laboratory, where he worked 2011-2012. He envisioned a consumer product and contacted Ed Tang, a friend and colleague he knew from Michigan, to discuss the matter. By the end of 2012, he had moved back to Ann Arbor to start the company. Of the eight people currently working at Avegant, five are U-M graduates, including Ed Tang (BSE EE ’11), co-founder and CEO.

The company has had the opportunity to move its base to more traditional VC-saturated areas, but Allan would like to keep Avegant in Michigan. “We have a major international airport, manufacturing infrastructure and, most importantly, a top engineering school in the University of Michigan,” said Allan. “And I love Ann Arbor.”

While working on his M.S. and Ph.D. degrees in electrical engineering at U-M, Allan came out with two patents based on his research with medical devices, and he developed an implantable drug delivery device for the treatment of chronic pain. He credits his technical as well as systems-level experience at U-M for providing him with the necessary tools to develop the Glyph.

Entertainment could be just the beginning for VRD technology. Allan is already exploring ways in which Glyph can be utilized for other purposes, such as visual therapies. He sees future opportunities for Glyph in vision medicine, for example, where it could serve people with serious visual impairments.

Helping others comes naturally for Allan, as well as combining that impulse with an entrepreneurial mindset. Just after graduating with his Ph.D., Allan spent thirteen months on a humanitarian trip around the world in which he performed charitable work, from pouring cement floors in Peru to teaching English in Thailand. He travelled with his U-M colleague Dr. Scott Wright after the two co-founded the company GlobeShares, Inc., which offered donors a way to finance specific humanitarian efforts.

For Allan, the highlight of his social expedition was working with a young Sudanese refugee he met in Cairo. He helped teach the young man math and physics, which led the youth to attend the African Academy and ultimately secure a place in an American university. “If you can just change one person’s life every decade,” says Allan, “the world will be a different place in a single generation.”

Hear what Mike Kail, VP of IT Operations of Netflix, and Philip Rosedale, Founder of Second Life andHigh Fidelity, have to say about the Glyph. Order Your Own Glyph! Pictured is CEO Ed Tang. 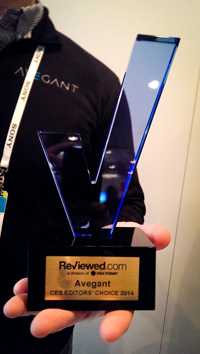 Avegant was a hit at this year’s Consumer Electronics Showcase (CES), where it earned a CES Editor’s Choice award from USA Today.

Avegant “holds the [Kickstarter crowdfunding] record for reaching a goal of $250,000 the fastest – done in 3 hours and 56 minutes,” according to an article in TIME.