EECS: Electrical and Computer Engineering
December 18, 2013
Jason considers diversity and inclusiveness in all activities that he undertakes.| Medium Read
Enlarge 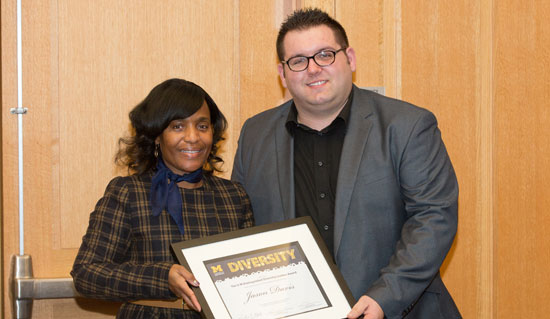 IMAGE:  Jason Davis receiving his award from Anita Green, Assistant to the Chancellor for Institutional Equity at U-M Dearborn

Jason Davis, Alumni Relations Coordinator for Electrical and Computer Engineering, is a recipient of the 2013 University of Michigan Distinguished Diversity Leaders Award. This award recognizes individuals and teams that have demonstrated extraordinary commitment and dedication to diversity and inclusion at the University of Michigan.

Jason is new to Electrical and Computer Engineering, joining the department this past August, 2013. Whle his focus on inclusion and diversity has already been apparent in his work in the department, this award was based on his impressive accomplishments in his previous role as Assistant Director of Alumni Relations at the U-M Dearborn campus.

As the liaison to alumni affiliate groups at U-M Dearborn, it was Jason’s responsibility to increase participation by alumni. He took a special interest in the African American Affiliates group, and in a short time grew the membership from 3 to 18 fully engaged members. He planned retreats for African American students, and increased participation in the annual Black Celebratory Program by 200% in one year. He restructured the institution’s awards process to be more inclusive of underrepresented minorities (including women). He made sure to include traditionally marginalized groups in the annual Inclusion Reception, which brings together students, staff, faculty, and alumni to discuss issues around diversity and inclusion. These groups ranged from LGBTQ advocacy groups to interfaith and multicultural organizations. He also noticed that there was not a good way for recent graduates to become engaged with the community, so he helped create a campus-wide Graduates of the Last Decade affiliates group.

As a volunteer, Jason served as the staff adviser for the student organization, Association for Diversity and Unity. He was a volunteer on the Soul for Success Retreat planning committee, a retreat for African American students, and has assisted many more underrepresented groups either as a volunteer or as part of his responsibilities. When Jason has seen an absence of balanced representation of any kind, such as the lack of any male members in the U-M Dearborn Staff Senate, or the lack of diversity in his office environment, he has worked successfully to change the scenario.

Jason considers diversity and inclusiveness in all activities that he undertakes, which is an approach to life praised by the speakers at the reception. Laurita Thomas, associate vice president for human resources, addressed all the winners when she said, “Seeking diversity and inclusion requires a continuing and sustained effort. We need each other to encourage us when the road gets rough. We cannot be all we can be without you.  The university could not be what it is to the City of Ann Arbor or the county, region, state, nation and world without the work you do.”

Mr. Davis received his bachelor’s degree in psychology and Master of Public Administration in non-profit leadership from U-M Dearborn in 2009 and 2011 respectively, and is currently working on his Ph.D. in Educational Leadership. He is the recipient of several awards , including the Martin Luther King, Jr. Writing Contest, the Outstanding Volunteer Award from the United Way for SE Michigan, the Leadership Synergy Award, two Chancellor’s awards for exceptional performance as an individual and a team member, an Outstanding Organization Advisor Award, and a Forever Go Blue: Excellence in Student Philanthropy Award.

Jason is looking forward to using the $1,000 in prize money to attend a professional conference of his choosing.