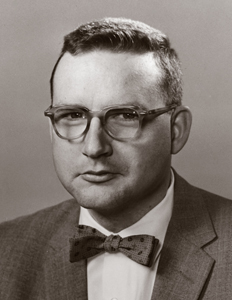 He is known for his devotion to students. He served as the faculty advisor to the University’s chapter of Chi Epsilon for 30 years, being only the second faculty advisor of that chapter since its inception in 1949. He also served as the department program advisor for 21 years, providing unprecedented continuity and quality to the undergraduate program in civil and environmental engineering.

Glysson’s devotion to his students is returned when former students travel to the annual CEEFA tailgate to spend time with him.

“One of my favorite memories [of the tailgates] is the first time I could call Professor Glysson ‘Gene’,” Earl Howard (BSE ‘76; MSE ’83) says.

One of the great joys of his career was directing Camp Davis from 1960 to 1964. At the time, Camp Davis, a University summer camp located in Wyoming, was used to teach surveying field work and geology. Since 1965, the camp has been used solely by the geology department.

In his essay, “The History of Summer Surveying Camp at The University of Michigan,” Glysson wrote, “Those of us who were involved still consider the overall experience as one of the most memorable times of our lives.”

Indeed, those involved enjoyed it so much that they organized Camp Davis reunions during CEEFA tailgates. Thomas Newhof  (BSE ‘60; MSE ’61), spent the summer of 1959 at the camp when Glysson was Acting Director. He says these reunions are some of his favorite memories. “This turned out to be a big hit,” Newhof says of organizing the reunions.

“A great deal of emphasis was placed in the desirability of picking a site which would allow the students to spend a summer in a country of marvelous natural beauty, with outstanding scenery and different flora and fauna. An additional benefit of the Wyoming location was the proximity of Yellowstone Park and the beautiful Teton Mountain range and associated geological formations. All of these considerations have proven to be very true and worthwhile,” Glysson wrote.

During his career, Professor Glysson taught and performed research on solid waste disposal and management, municipal engineering, and water, wastes, and solid wastes engineering. He was a consultant to the National Science Foundation, the World Health Organization, the U.S. Environmental Protection Agency, and the Michigan Department of Health. He also spent one term as a commissioned officer in the U.S. Public Health Service assigned to the Land Protection Branch Office of Solid Wastes. He was recognized for teaching in 1970 by the student chapter of the American Society of Civil Engineers (ASCE), and by the College of Engineering for Excellence in Faculty Service in 1992. In 1983 he was named Outstanding Civil Engineer of the Year by the Michigan Section of the ASCE.