New algorithms and theory for shining light through non-transparent media 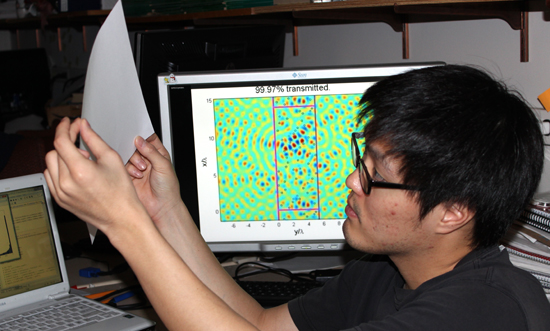 Curtis Jin, graduate student in electrical engineering, is part of a research team that has developed theory and algorithms that can mitigate or even overcome loss in transmission power due to the multiple scattering of light in non-transparent (ie, scattering) media. Motivated by bio-imaging applications where it is not possible to measure the forward-scattered fields, their technique utilizes backscatter analysis to construct ‘perfectly transmitting’ wavefronts thereby potentially facilitating the use of optical techniques for sensing and imaging in highly scattering settings where it was previously not thought to be possible.

Light shined on or through highly scattering media, such as turbid water, becomes blocked and diverted due to randomly located particles in the media. The result is that most of the light doesn’t make it through. By using high-precision computational electromagnetic solvers, the authors, which include Jin’s advisor Prof. Raj Nadakuditi, Prof. Eric Michielssen, and Prof. Stephen Rand, have provided the first numerically rigorous verification that 100% transmission is possible for random media composed of hundreds of thousands of nonabsorbing, or lossless, scatterers, provided the light waves are constructed in accordance with their specially created algorithms.

The conventional method of devising algorithms for this purpose is to use forward-transmitted information. However, here the researchers use the backscattered information instead, which is more accessible in situations such as bio-imaging and underwater communication. Their algorithms were able to construct the wavefront much faster and with greater success than existing algorithms.

As shown in the diagrams below, their algorithms turned what would normally be nearly a 50% transmission level to nearly 100% of the wavefront, or light, being transmitted through the lossless material. 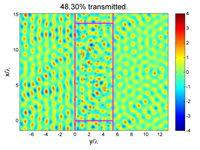 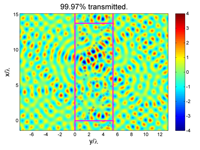 IMAGE:  After using the optimized wavefront, nearly 100% transmission was achieved.

The simulations were done in 2D, but the authors stated that they can be more generally applied to other scattering problems. Work is now underway to extend this research to imaging and sensing applications.

The paper, Iterative, backscatter-analysis algorithms for increasing transmission and focusing light through highly scattering random media, by Curtis Jin, Raj Rao Nadakuditi, Eric Michielssen, and Stephen C. Rand, was published in the Journal of the Optical Society of America, Vol. 30, No. 8.

The authors would like to acknowledge the pioneering research done by Allard Mosk and Ivo Vellekoop, Exploiting disorder for perfect focusing, Nature Photonics 4, 2010, and Opaque lens focuses light, Physics World, 2007, that motivated this research.