Dr. Edward J. Hoffman (1942-2004), for whom the award is named, contributed to the creation of the positron emission tomography (PET) scanner in 1973. A PET scanner operates through nuclear processes to produce 3D images of the body. It is especially useful for detecting cancer metastasis.

Prof. Jeff Fessler, an internationally recognized expert in computational medical imaging, has made significant improvements to medical image reconstruction methods. These improvements have enhanced patient safety by lowering radiation dosages and improving medical diagnoses. He assisted GE Medical Systems in their development of the first statistical reconstruction algorithms for their commercial PET scanner in the late 1990’s. For the past decade his research group collaborated with GE Healthcare, contributing to image reconstruction algorithms for low dose CT scanners, called Veo. The technique was introduced at U-M Hospital in 2012.

With radiation levels now reduced, he is currently focused on getting even better images that come from CT and MRI scanners, while reducing the amount of time it takes to process the scans. He has already published a number of highly influential papers in both activities. Prof. Richard Leahy, a former recipient of the award and professor at the University of Southern California, calls Prof. Fessler’s online book, “the most comprehensive book currently available on the topic of iterative image reconstruction,” an increasingly broad and complex field.

Prof. Fessler is also currently working with doctors in Radiation/Oncology to generate 3D MRI images of tumors while taking into account the motion that is caused by a patient’s breathing. Called 4D MRI, it is considered one of the holy grail problems in signal and image processing. 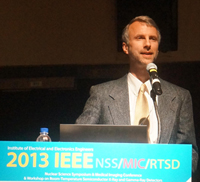 IMAGE:  Prof. Fessler was presented with the award at the 2013 IEEE Nuclear Science Symposium and Medical Imaging Conference, held in Seoul, Korea. After being introduced at a special session, he gave an invited presentation about his research.

His interdisciplinary approach to research has led to fruitful collaborations with researchers in multiple disciplines, including other departments in the College of Engineering as well as the Medical School and the College of Literature, Science and the Arts. He holds courtesy appointments in Biomedical Engineering and Radiology.

In recognition of his impact as an educator, Prof. Fessler received the 2012 Rackham Distinguished Graduate Mentor Award, the U-M Henry Russel Award (for scholarship and teaching), the College of Engineering Education Excellence Award and David Liddle Research Excellence Award, a Teaching Excellence Award from the Biomedical Engineering department, and was voted Professor of the Year by the EECS student honor society Eta Kappa Nu. Throughout his career at Michigan has been a leader in the areas of undergraduate and graduate curriculum and recruiting

Prof. Fessler received his Ph.D. from Stanford University in Electrical Engineering, and joined the University of Michigan in 1990 as a post-doctoral fellow in the Division of Nuclear Medicine. He was later an assistant professor of Biomedical Engineering before joining the EECS Department in 1995. He is currently Associate Editor of IEEE Transactions on Image Processing and has served the medical imaging community in many capacities throughout his career. He holds 5 patents, and is a Fellow of the IEEE.