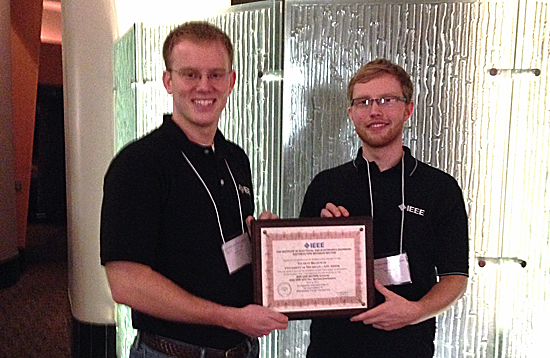 IMAGE:  Matt Kneiser and Alex Hakkola, President and Vice President of the Michigan branch of IEEE, accepted the award for Best Student Branch in SE Michigan

The University of Michigan student chapter of IEEE was named best IEEE student branch in Southeastern Michigan for 2012-2013. Matt Kneiser and Alex Hakkola, the current president and vice president of IEEE at Michigan, accepted the award on behalf of the student chapter at the IEEE Southeast Michigan Section (SEM) Fall Conference, November 6, 2013.

Matt said the award “is the result of the competence and strength exhibited by a series of leaders in our student branch, not any single person. IEEE opens up many doors for students – professionally and socially. It’s great to be part of that process and watch students grow. I get the opportunity to invest in the university in a meaningful way.”

The goal of Michigan’s student branch of IEEE is to be an interface between students, technology companies, the EECS department, and the IEEE national organization. It is open to all students on campus. During the past year, the group held many technical and social events, including a Professor Speaker Series, information sessions by a variety of technical companies, and many events to promote fellowship and a fun break from studies. And of course they continue to help run the dB Café along with HKN to provide affordable and yummy food to students, faculty, and staff.