by Kate McAlpine
Michigan Engineering
October 1, 2013
Sunitha Nagrath and colleagues in engineering and medicine have developed a way to capture and grow the circulating tumor cells that allow cancer to spread.| Medium Read
Enlarge 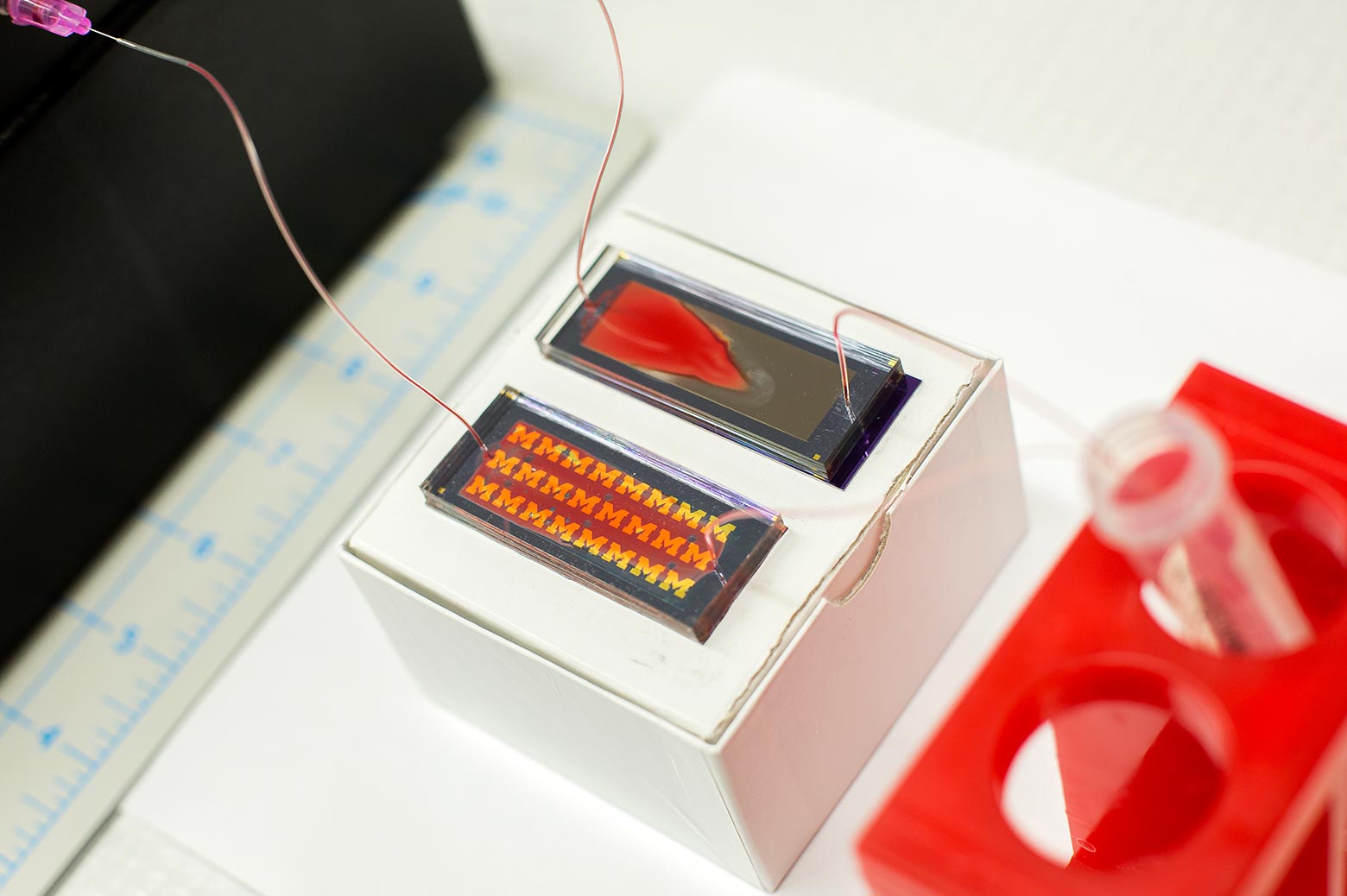 IMAGE:  Members of ChE Professor Sunitha Nagrath's lab set up an demonstration of an experiment running blood through a microfluidic filter that the research group has designed. Photo: Joseph Xu

A microfluidic chip developed at the University of Michigan is among the best at capturing elusive circulating tumor cells from blood—and it can support the cells’ growth for further analysis.

The device, believed to be the first to pair these functions, uses the advanced electronics material graphene oxide. In clinics, such a device could one day help doctors diagnose cancers, give more accurate prognoses and test treatment options on cultured cells without subjecting patients to traditional biopsies.

“If we can get these technologies to work, it will advance new cancer drugs and revolutionize the treatment of cancer patients,” said Max Wicha, M.D., Distinguished Professor of Oncology and director of the U-M Comprehensive Cancer Center and co-author of a paper on the new device, published online this week in Nature Nanotechnology.

“Circulating tumor cells will play a significant role in the early diagnosis of cancer and to help us understand if treatments are working in our cancer patients by serving as a ‘liquid’ biopsy to assess treatment responses in real time,” said co-author Diane Simeone, M.D., the Lazar J. Greenfield Professor of Surgery at the U-M Medical School and director of the Translational Oncology Program.

If we can get these technologies to work, it will advance new cancer drugs and revolutionize the treatment of cancer patients.Max Wicha, Professor of Oncology and Director of Forbes Institute for Cancer Discovery
Tweet

“Studies of circulating tumor cells will also help us understand the basic biologic mechanisms by which cancer cells metastasize or spread to distant organs—the major cause of death in cancer patients.”

Yet these cells aren’t living up to their promise in medicine because they are so difficult to separate from a blood sample, the researchers say. In the blood of early-stage cancer patients, they account for less than one in every billion cells, so catching them is tougher than finding the proverbial needle in a haystack.

“I can burn the haystack or use a huge magnet,” said Sunitha Nagrath, an assistant professor of chemical engineering, who led the research. “When it comes to circulating tumor cells, they almost look like—feel like—any other blood cell.”

On their microfluidic chip, Nagrath’s team grew dense forests of molecular chains, each equipped with an antibody to grab onto cancer cells.

Even after the cells are caught, it’s still hard to run a robust analysis on just a handful of them, the researchers say. That’s why this demonstration of highly sensitive tumor cell capture, combined with the ability to grow the cells in the same device, is so promising.

Hyeun Joong Yoon, a postdoctoral researcher in the Nagrath lab with a background in electrical engineering, was instrumental in making the microfluidic chip. He started with a silicon base and added a grid of nearly 60,000 flat gold shapes, like four-petaled flowers, each no wider than a strand of hair. 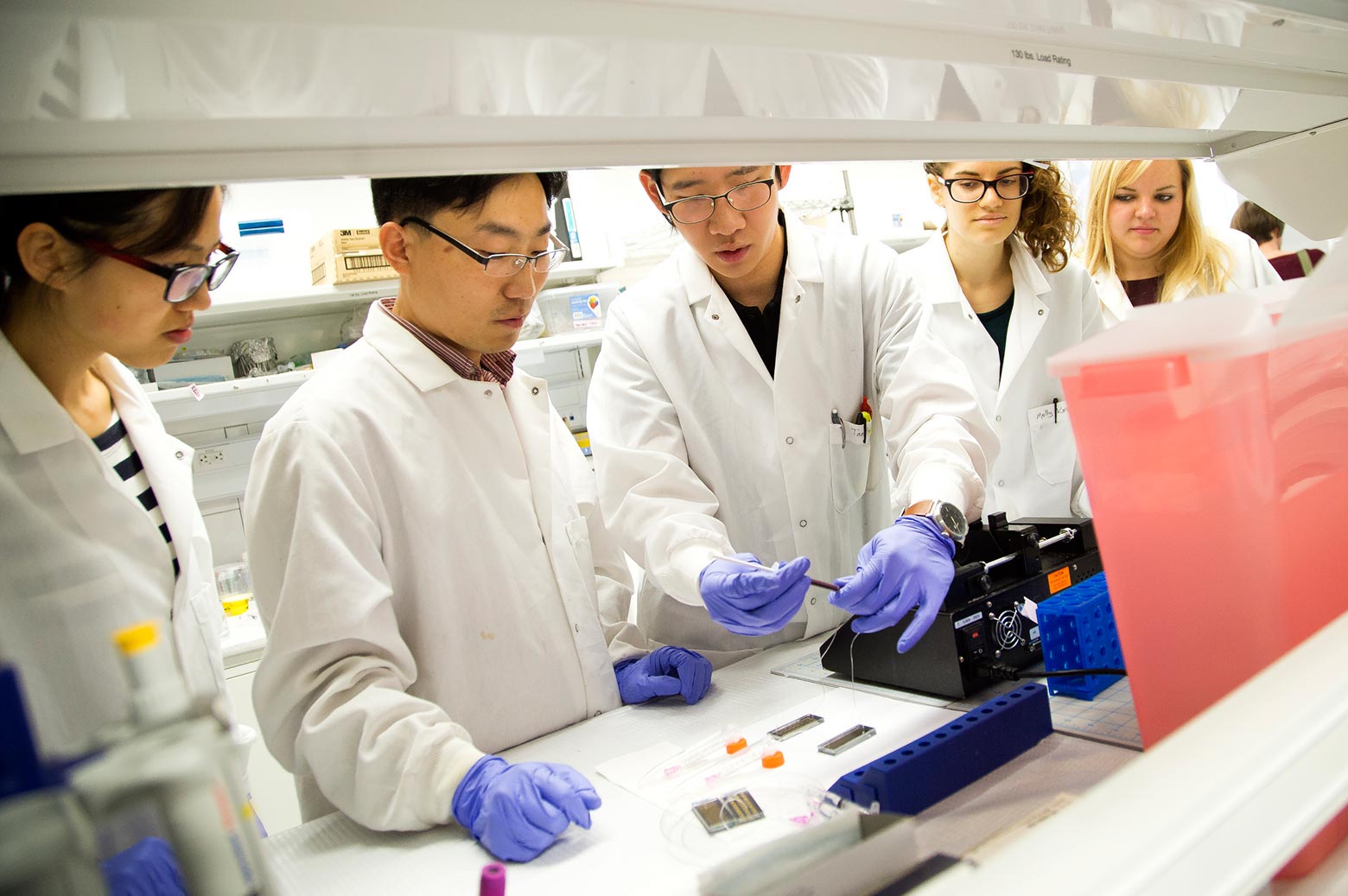 The gold flowers naturally attracted a relatively new material called graphene oxide. These sheets of carbon and oxygen, just a few atoms thick, layered themselves over the gold. This layered formation allowed the team to grow the tumor-cell-catching molecular chains so densely.

“It’s almost like each graphene has many nano-arms to capture cells,” Nagrath said.

To test the device, the team ran one-milliliter samples of blood through the chip’s thin chamber. Even when they had added just three-to-five cancer cells to the 5-10 billion blood cells, the chip was able to capture all of the cells in the sample half the time, with an average of 73 percent over 10 trials.

“That’s the highest anybody has shown in the literature for spiking such a low number of cells,” Nagrath said.

The team counted the captured cancer cells by tagging them with fluorescent molecules and viewing them through a microscope. These tags made the cancer cells easy to distinguish from accidentally caught blood cells. They also grew breast cancer cells over six days, using an electron microscope to see how they spread across the gold flowers.

“When you have individual cells, the amount of material in each cell is often so small that it’s hard to develop molecular assays,” Wicha said. “This device allows the cells to be grown into larger quantities so you can do a genetic analysis more easily.”

The chip could capture pancreatic, breast and lung cancer cells from patient samples. Nagrath was surprised that the device was able to catch about four tumor cells per milliliter of blood from the lung cancer patients, even though they had the early-stage form of the disease.

Working in a team that comprises both engineers and medical professionals at U-M, Nagrath is optimistic that the new technique could reach clinics in three years.

The paper is titled “Sensitive capture of circulating tumor cells by functionalized graphene oxide nanosheets.” The university is pursuing patent protection for the intellectual property and is seeking commercialization partners to help bring the technology to market.

This research is supported by the National Institutes of Health Director’s New Innovator Award No. 1DP2OD006672-01.

As Ann Arbor’s maker community sprang into action making face shields, Michigan Medicine and the U-M College of Engineering offered a recommended design that is effective and straightforward to produce.| Medium Read 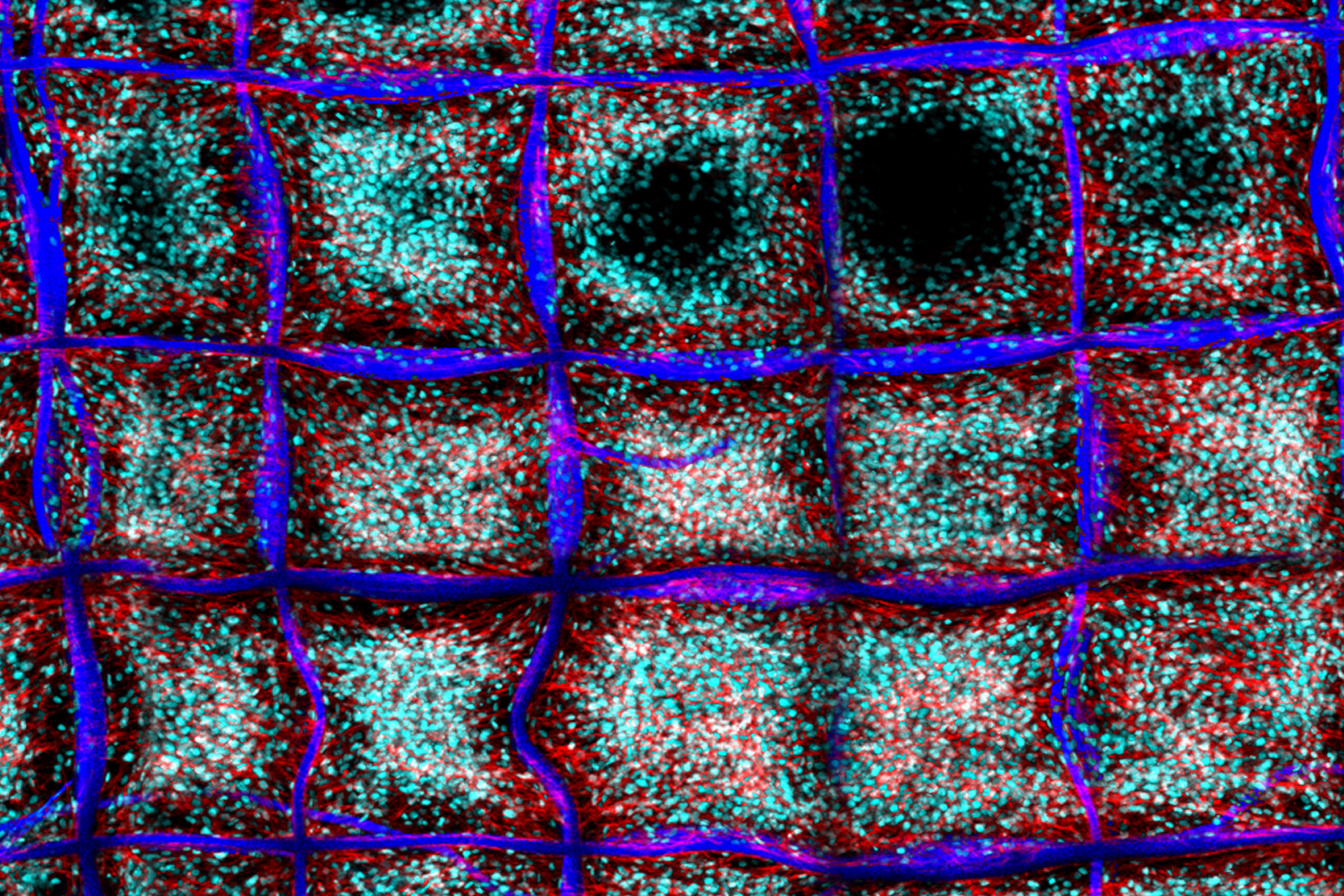 While previous structures guessed at the environment that cells would want, the new design lets the cells build to their own specifications.| Medium Read
Researchers