A primary application for this research is structural health monitoring (SHM), specifically, determining when to collect data to determine the fundamental vibrational modes of civil structures (such as buildings, bridges, large ships, etc.). SHM systems are critical for monitoring aging structures and infrastructure in a cost-effective manner. Such systems typically involve collections of battery-operated wireless sensors that sample vibration data over time. After the data is transmitted to a central node, modal analysis can be used to detect damage in the structure. 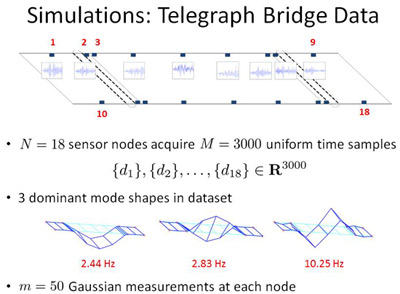 In the SPARS paper, the authors study the mathematical properties of using Compressive Sensing (CS) for determining the fundamental modes or singular vectors in more general data settings than in SHM systems. The methods are intended to minimize power consumption by allowing the data to be sampled and/or transmitted more efficiently. At the central node of a sensor network or a central computational device, all of these frameworks involve a very simple technique for estimating the structure’s mode shapes, and by extension its structural health, without requiring a traditional CS reconstruction of the vibration signals. All that is needed is to compute a simple Singular Value Decomposition (SVD) of a small “sketch” of the data.

The method described in the paper is expected to increase the longevity of battery-based sensor devices that record structural information, increase the accuracy of basic data analysis techniques such as the SVD, and decrease the memory requirements of such tasks.

Mr. Park recently completed his dissertation under the direction of Profs. Gilbert and Wakin. He will be joining Schlumberger Research.