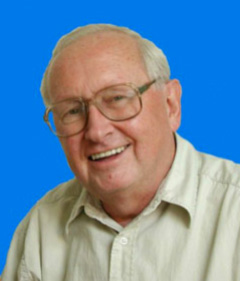 “Measurements made by the Omegatron added immensely to knowledge of the upper atmosphere of the Earth and paved the way to mass spectrometric measurements of the planetary atmospheres,” stated Dr. George Carignan, Research Scientist Emeritus of the U-M Department of Atmospheric, Oceanic and Space Sciences. Dr. Carignan was a close friend and collaborator of Dr. Niemann’s throughout his career.

Throughout his career, Dr. Niemann maintained a close relationship with the Space Physics Research Laboratory at U-M. Dr. Carignan stated, “His loyalty to Michigan provided space exploration opportunity to a large number of students, and his educational and collaborative association with the Michigan College of Engineering helped to fuel its strong space science and engineering program.”

Upon hearing of his death, Dr. Niemann’s good friend and colleague Jonathan Lunine stated, “He touched so many people scientifically and personally. Hasso’s kindness in inviting young people like me to be part of his Huygens GCMS proposal, his exemplary leadership and extraordinary work ethic in making the instrument happen, and his graceful and gracious diplomacy in dealing with the myriad people involved in the project (and difficult ones like me) were all lessons in being a good human being that I will never forget.”2