EECS: Electrical and Computer Engineering
April 30, 2013
The Croes Medal is awarded to the authors of an ASCE paper that was particularly notable for its contributions to engineering science.| Short Read
Enlarge 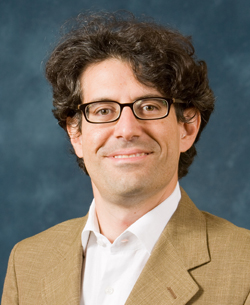 Computer vision professor Silvio Savarese has been awarded the 2013 J. James R. Croes Medal from the American Society of Civil Engineers (ASCE) for the paper, Integrated Sequential As-Built and As-Planned Representation with D4AR Tools in Support of Decision-Making Tasks in the AEC/FM Industry. Co-recipients of the award are co-authors Prof. Mani Golparvar-Fard (former student and Assistant Professor of Construction Engineering & Management at Virginia Tech) and Prof. Feniosky Peña-Mora (Dean of Engineering and Applied Science at Columbia University).

Profs. Savarese, Golparvar-Fard and Peña-Mora pioneered a method to automatically track structural changes happening in construction sites, and enabled data to be collected simply and inexpensively through a process called Four-Dimensional Augmented Reality (D4AR). The technology generates a 3D map of the site for a given point in time (time is the fourth dimension). This information can be immediately transmitted to off-site locations, and is expected to greatly facilitate work at construction sites. The three researchers recently co-founded the company Vision Construction Monitoring, LLC, to commercialize the technology.

The Croes Medal was established in 1912 and is awarded to the authors who published a paper in any of the ASCE journals that was particularly notable for its contributions to engineering science. It is one of ASCE’s most prestigious awards, and named in honor of the first recipient of ASCE’s Norman Medal, John James Robertson Croes, past president of ASCE.

Prof. Savarese, Dr. Golparvar-Fard and Mr. Pena-Mora will receive the award at the 143rd Annual Civil Engineering Conference in October.