The Noisy Wolverines earn the right to compete for gold

A team of “Noisy Wolverines” made it through the first round of competition to be among the top 15 teams in the nation to compete in the DARPA Spectrum Challenge competition. They hope to take home the prize for best communication system design.

The team of graduate students, led by Prof. Achilleas Anastasopoulos, ranked 4th among 90 competing teams in the qualification round; only 46 teams were able to complete all three qualification hurdles. [Final results and team standings]

To win the competition, the students will demonstrate a radio protocol that is able to provide the most reliable communication in an environment fraught with competing radios and other disrupting elements.

DARPA created this challenge in light of the world’s increasing reliance on wireless technology, which will create more and more interference, or noise, among radios using the same communication channel. For example, the result of an insecure radio transmission can be as harmless as accidentally opening a neighbor’s garage door with a wireless garage door opener, or as devastating as the inability for quick responders to communicate effectively in a life-or-death situation. Another potentially disruptive element to effective wireless communication is the presence of electromagnetic waves in communication channels reserved for military and government use. 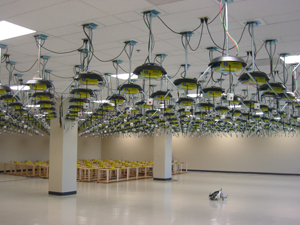 IMAGE:  The Noisy Wolverines were assigned two of these systems hanging from the ceiling, each of which included a transmitter and receiver. They remotely logged into the network and attempted to communicate clearly between the two systems amidst the "noise" of the surrounding systems. Photo of the ORBIT Indoor Testbed at Rutgers University's Wireless Information Network Laboratory (WINLAB).

To compete in this challenge, Prof. Anastasopoulos put together a team of Electrical Engineering:Systems and Computer Science & Engineering graduate students with expertise in programming, physical layer design, and Universal Software Radio Peripheral (USRP) design. His own expertise includes communication theory with an emphasis on designing effective transmission schemes for noisy channels, and code design for wireless channels.

Srinagesh Sharma, a current master’s student in Electrical Engineering:Systems, described the first three hurdles as being quite basic. He and a few students from the team were able to complete the first 2 hurdles in a day, and then spent most of the remaining time testing their design required for the 3rd hurdle. He expects that the other members of the team will employ their expertise in the next phase of competition, which should require more advanced skills. He has a guess as to what will be required, but the team will only know for certain when DARPA issues instructions for the next phase of competition.