EECS: Computer Science and Engineering, EECS: Electrical and Computer Engineering
March 13, 2013
The SkySpecs robot will designed for use by end users and will be controlled via a touchscreen tablet.| Short Read
Enlarge 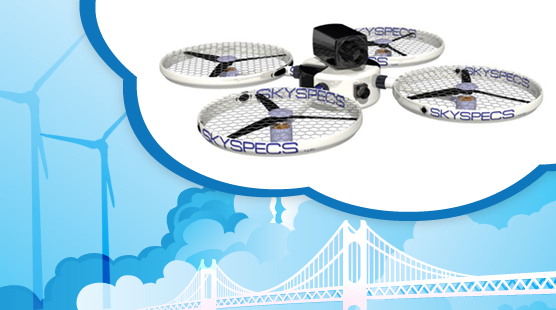 A team of four U-M students has founded SkySpecs, a company that will develop and produce autonomous aerial vehicles for commercial and industrial use to safely reach and inspect tall or otherwise hard-to-reach structures, such as bridges and tall wind turbines.

The four founders of SkySpecs include Sam DeBruin (BSE CE ‘12 and current CSE graduate student) and Ryan Morton (MSE CSE ‘13). Rounding out the team are Danny Ellis, who holds a bachelor’s degree in aerospace engineering from U-M and who is now working toward a dual master’s degree in Aerospace Engineering and Entrepreneurship; and Tom Brady, who recently completed his master’s in Aerospace Engineering. The company currently has two employees in addition to the founders.

Although less than a year old, SkySpecs appears poised for success and has raised $100,000 from private investors and business competitions, including $50,000 from placing first in the recent Michigan Clean Energy Venture Challenge.

The company had its genesis in the Michigan Autonomous Aerial Vehicles (MAAV) student team, which Ellis founded in 2009 in order to build an autonomous flying robot to compete in the annual International Aerial Robotics Competition (IARC). In 2012, the MAAV team – which included all four future SkySpecs founders – placed first in the IARC, outperforming 20 other teams from around the world. 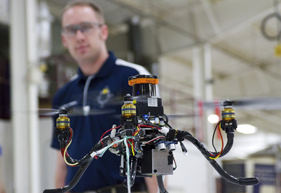 IMAGE:  Ellis with the MAAV Robot

Both the MAAV and SkySpecs flying robots are based on a quad-rotor design that allows them to hover and maneuver precisely, but the final commercial SkySpecs robot will be significantly different from its predecessor. The U-M team’s robot used a laser sensor to scan and map its environment in order to “see,” but the SkySpecs robot will employ an interchangeable mix of cameras, ultrasonic sensors, and thermal sensors instead.

In addition, the entire SkySpecs vehicle will be ruggedized and designed to withstand harsh environments – criteria the MAAV robot did not have to meet. The SkySpecs robot will be larger, weighing in at about 11 pounds and will cost about $50,000, due largely to its various expensive sensors.

The SkySpecs robot will designed for use by end users, not programmers, and will be controlled via a touchscreen tablet. It will be equipped with a series of high-level commands, such as the ability to take off, land, return to home, and hold position, as well as with the ability to place way-points in the environment that the vehicle will follow.