Using HERCULES to probe the interior of dense plasmas

IMAGE:  (a) Various electron beam distributions after traveling through the 10,000 T strength fields generated on the surface of a solid by the ultra-intense laser HERCULES (W. Schumaker et al., Phys. Rev. Lett. 2013). (b) The HERCULES laser, in the Center for Ultrafast Optical Science at the University of Michigan is the world's most intense laser.

For the first time, researchers probed the interior of highly dense plasmas using the world’s most intense tabletop laser called HERCULES, located in the Center for Ultrafast Optical Science (CUOS). Scientists are now able to study very dense plasmas, which has important implications for nuclear fusion energy and astrophysical research.

“No one has been able to do this before,” said Dr. Anatoly Maksimchuk, who specializes in high-intensity laser research and laser-plasma interaction at CUOS along with Dr. Vladimir Chyvkov, Dr. Victor Yanovsky, director of the HERCULES laser, Prof. Alec Thomas, and Prof. Karl Krushelnik, director of CUOS. “It took the capability of HERCULES to generate directional electron beams of sufficient quality and strength to accomplish this breakthrough.”

Exploiting this capability, graduate student Will Schumaker and a team of researchers were able to image extremely strong magnetic fields (10,000 times that of the strongest bar magnet) in a surface plasma of only 10s of microns in size that was expanding at close to the speed of light. The research was published in the January edition of Physical Review Letters.

Explains Dr. Maksimchuk, “Intense laser pulses interacting with solid surfaces can create very energetic and dense plasmas. These plasmas are highly complex and often evolve on very short time scales, so that measurement of plasma parameters such as density and magnetic field strength requires very short bursts of probing radiation which can penetrate through the plasma.

Using the 30 femtosecond (30×10-15 seconds) duration laser pulse from the HERCULES laser, intense light was focused onto a thin metal foil to generate a rapidly expanding surface plasma. To “probe” the magnetic fields generated within this plasma, a second short laser pulse was focused into atmospheric density gas. This generated a burst of relativistic electrons by “surfing” them on the electric plasma wave generated behind the pulse; the temporal duration of the resulting electrons was comparable to that of the laser pulse.

Having propagated through the magnetic fields generated in the laser-solid interaction, the spatial distribution of electrons reflects the magnetic field structure at the time when they were deflected. By adjusting the delay between the pulse hitting the solid target and the probe electron pulse, it is now possible to make a “movie” of plasma evolution.” 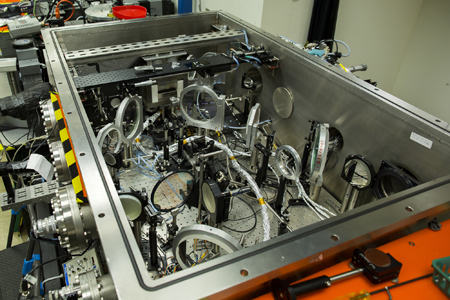 IMAGE:  A look inside of the experimental chamber of the world's most intense tabletop laser, HERCULES. Many mirrors are needed to split and guide the laser pulse, timing it so that the electrons arrive at the plasma while it is growing. Photo by Joseph Xu

With new courses at the freshman, sophomore, and junior levels, Michigan ECE is training tomorrow’s engineers to be leaders in a diverse workforce in service to society| Long Read
In the News
National GeographicDec 3, 2018
Why space weather is being made in the lab
Eurekalert!Nov 9, 2018
A stellar achievement: Magnetized space winds in the laboratory