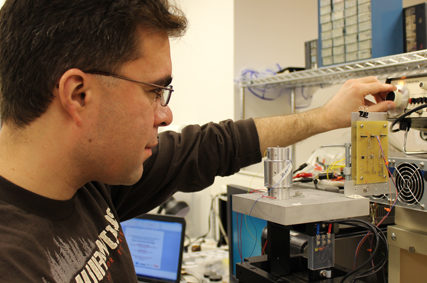 IMAGE:  James McCullagh adjusts the frequency and acceleration of vibrations on a shaker table to test the Parametric Frequency Increased Generator (PFIG).

James McCullagh, a doctoral student in electrical engineering, conducts research that has important ramifications on the safety of the nation’s infrastructure, starting with our bridges. He is helping to develop energy harvesting devices and circuits to power wireless sensor nodes which can monitor bridge health.

“The nation’s bridges are deteriorating,” stated James. In 2010, the U.S. Department of Transportation rated over 10% of the nation’s bridges as structurally deficient. Wireless sensors can monitor these bridges, however, these structural health monitoring (SHM) sensors may need to be placed in extremely hard to reach places where constantly replacing batteries can be expensive and dangerous. One example of this is under the middle of a large and heavily trafficked suspension bridge covering a significant body of water.”

IMAGE:  The PFIG device is currently attached to the underside of the Carquinez bridge in California.

“Our group previously introduced the Parametric Frequency Increased Generator (PFIG) in which a large inertial mass snaps back and forth between latching magnets on the springs of two electromagnetic transducers (FIGs). Thus the PFIG converts the low frequency, non-periodic, and low acceleration bridge vibrations into higher frequency mechanical oscillations to be electrically transduced and rectified.”

“Previous generations of PFIG have been temporarily installed on the new Carquinez bridge near Vallejo, California. In these recent tests, an improved PFIG was installed on the new Carquinez bridge, and for the first time a circuit interface was also installed with the PFIG. In short-term tests the power harvested on the bridge is increased by 10x from previous versions. We also installed the PFIG system (PFIG and interface electronics) for a long-term test, and it shows continuous and ongoing harvesting on the bridge for more than 6 months since April 30, 2012.”

This work is supported by the National Institute of Standards and Technology (NIST) Technology Innovation Program (TIP).

About the PowerMEMS Conference

The 12th International Workshop on Micro- and Nano-Technology for Power Generation and Energy Conversion Applications, or PowerMEMS 2012, focuses on all aspects of energy conversion and processing at the micro and nano scales. Its topics of interest range from basic principles, to materials and fabrication, to devices and systems, to applications.

Read about an earlier generation of the device