EECS: Electrical and Computer Engineering
November 5, 2012
Roberts is helping to develop low-power sensor nodes that will be worn on the body to detect certain medical conditions.| Short Read
Enlarge 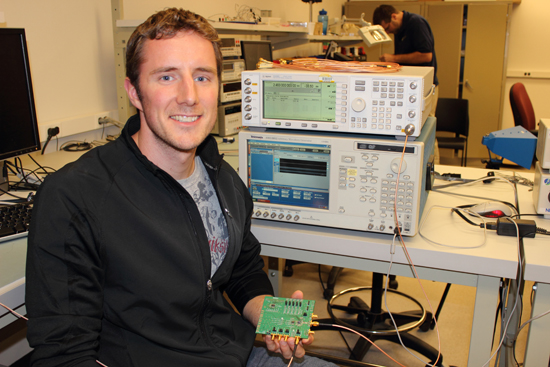 IMAGE:  Nathan Roberts in the lab with his advisor, Prof. David Wentzloff, in the background.

Nathan Roberts is working with a team comprised of researchers from the University of Michigan and the University of Virginia to facilitate remote patient monitoring through wireless body area networks (WBAN). He is helping to develop extremely low-power sensor nodes that will be worn on the body to detect certain medical conditions that will be transmitted to a central location. 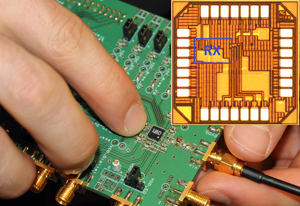 IMAGE:  Nathan is pointing to the location of the receiver on his test board. The receiver was fabricated on a 1mm2 chip using a 130μm CMOS process. The dimensions of the receiver itself is160μm by 190μm.

In his research that earned him Best Student Paper Award at the 2012 IEEE Subthreshold Microelectronics Conference, he designed an ultra-low power receiver for wireless sensor node applications that operates using nanowatts of power. Specifically, he designed “a 98nW receiver with a 23nW active rectifier RF front-end biased in deep subthreshold near the saturation/linear boundary.” The paper, 915MHz Ultra Low Power Receiver using Sub-Vt Active Rectifiers, was co-authored by his advisor, Prof. David Wentzloff.

This receiver consumes about 500x less power than other state-of-the-art low-power receivers used for short-range wireless communications. This reduction in power is necessary to accommodate body-worn sensor nodes which are both very small, and that need to operate for long periods of time.

Nathan is a graduate student in electrical engineering working with Prof. David Wentzloff, who directs the Wireless Integrated Circuits and Systems Group. His research centers on low-power wireless communication for energy constrained systems. In his research, he has produced advanced WBAN channel models that account for path loss variation in time as well as nanowatt power receivers for energy efficient communication.

The 2012 IEEE Subthreshold Microelectronics Conference specializes in ultra-low-power microelectronics for handheld and wireless devices. Typical applications include sensor networks, RFID tags, implanted medical devices, portable biosensors, handheld devices, and space-based applications. As stated on the conference website, “One of the most promising methods of achieving ultra-low-power microelectronics is to reduce the operating voltage to below the transistor threshold voltage, which can result in energy savings of more than 90% compared to conventional low-power.” The plenary talk at this year’s conference was given by Prof. David Blaauw. The conference was sponsored by Texas Instruments and Qualcomm.