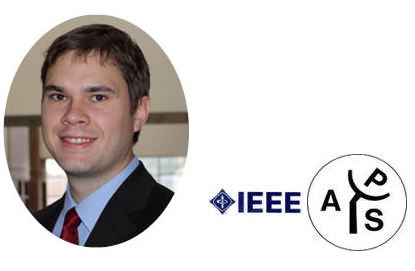 Chris Berry, a doctoral student in the Electrical Engineering program, received an IEEE Antennas and Propagation Society (AP-S) Doctoral Research Award for the 2012-13 academic year. The award will support his doctoral research in the area of plasmonic photoconductive antennas for high power terahertz generation. 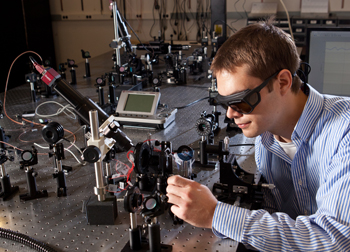 IMAGE:  Chris Berry at work in the lab.

“Terahertz waves are a form of safe radiation with frequencies below that of visible light,” explains Chris. “Due to the special properties of this type of radiation, they have many applications in the areas of medical imaging, security screening, quality control, and environmental monitoring. However, the devices which generate terahertz waves are currently very inefficient and only capable of producing a few microwatts of power, limiting their widespread use.”

“My research has focused on creating higher power sources of terahertz waves. By incorporating nano-scale plasmonic gratings into the terahertz antenna, we have been able to dramatically increase the optical to terahertz conversion efficiency. This has allowed our devices to generate up to 50 times more terahertz power than standard devices under the same biasing conditions.”

Chris works with Prof. Mona Jarrahi in the Terahertz Electronics Laboratory. He is a three time recipient of a fellowship from the Michigan Space Grant Consortium (MSGC).

The IEEE Antennas and Propagation Society (AP-S) awards up to six $1000 pre-doctoral (undergraduate and masters-level) scholarships and up to ten $2500 PhD fellowships each year to encourage students to pursue a career in the area of electromagnetics. The awards are intended to support students involved in project work directed by a faculty member at their institution who is a member of the IEEE Antennas and Propagation Society (AP-S). Two award competitions are held each year.