Fred Buhler spent his summer working in Prof. Michael Flynn’s lab with graduate students working in the area of analog and mixed signal circuits as part of the College of Engineering SURE program (Summer Undergraduate Research Experience).

He had just arrived at Michigan as a transfer student the previous academic year, and wanted to get some actual research experience.

In this video, he talks about saving the research group $100K in test equipment while simplifying the entire testing process. He worked with Prof. Michael Flynn’s group, which has developed integrated wireless transceivers with record energy efficiency. The project involved designing new boards and writing test software, as well as writing software to control instruments. Some integrated circuit design was also included in the project.

In his project, Fred reduced the amount of equipment needed to test a device from this: 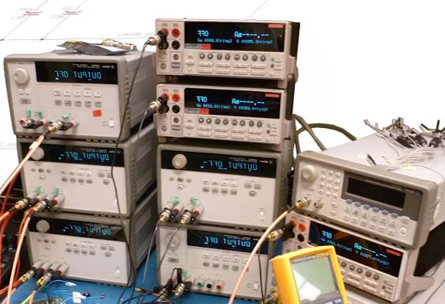 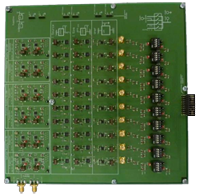 The real key of course is building something that works. Fred’s board worked the first time, and showed superior noise characteristics under all testing conditions.

Part of Fred’s experience included communicating with the Korean company that fabricated the board. He had to learn quite a bit about circuit board design himself – including developing the software, and then make sure the company understood what he needed, and that he understood what information the company needed. The first board took about one month to design, but the second was completed in about a day.

Other things you won’t learn in the video is he previously spent more than seven years in the Navy before deciding to return to school. Because of a technicality he wasn’t able to apply to Michigan as either a new freshman or a transfer student straight out of the Navy, so he spent a couple years at Grand Rapids Community College before enrolling here as an undergraduate student in electrical engineering.

As a side note – this is Fred’s first video, and it’s great! You’ll get some laughs, learn a lot about what he did last summer – and even get a mini tutorial on analog-to-digital converters. 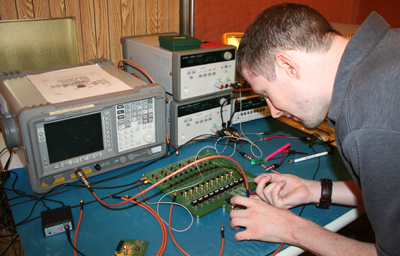 IMAGE:  Fred setting up the board in a specially-designed room that reduces interference during testing.

Watch more videos from the SURE program.