EECS: Computer Science and Engineering, EECS: Electrical and Computer Engineering
August 8, 2012
The MAAV team, which was founded in 2009, was one of only two to successfully maneuver and map the set course with their unmanned aerial vehicle.| Short Read
Enlarge 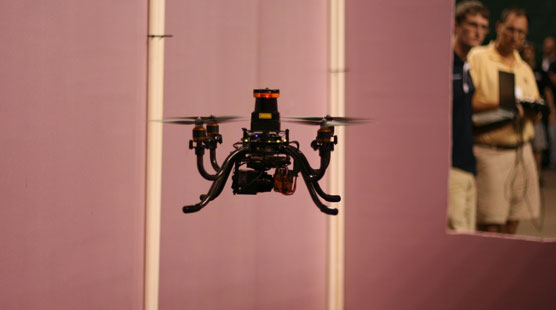 The Michigan Autonomous Aerial Vehicles (MAAV) student team may not have accomplished “mission impossible” with their miniature, robotic four-propeller helicopter, but they did bring home the gold.

Out of a field of more than twenty competitors, the MAAV team won first place at the 2012 International Aerial Robotics Competition (IARC), beating schools such as Georgia Tech and Embry-Riddle with its custom-built quadrotor. The MAAV team, which was founded in 2009, was one of only two to successfully maneuver and map the set course with their unmanned aerial vehicle, while blogging about their experience here.

The IARC competition designs missions that are repeated each year until a team is able to complete the full mission. In the 20 years of IARC, this is the sixth and most difficult challenge presented to teams. No teams completed this year’s mission, but MAAV came in first by scoring the greatest number of points.

The challenge requires an aerial vehicle to navigate completely autonomously through the window of a building, following wall signs written in Arabic that lead it to a flash drive on a table. The robot is then supposed to retrieve the drive, replace it with a decoy, and exit the building – all while avoiding laser tripwires and security cameras. 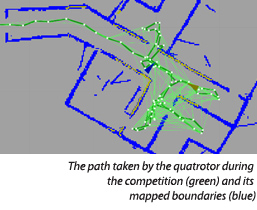 “The mission specific objective of seeing the flash drive, picking it up, and putting down a decoy requires extreme dexterity and precision usually impossible for a flying vehicle,” said hardware team lead and computer science and engineering graduate student Sam DeBruin. “We need to navigate in extremely tight spaces and this adds to the complexity.”

This year’s team accomplished their goal, which was to navigate through and map the building successfully. The team’s quadrotor uses LIDAR laser sensors, an inertial measurement unit and a fully-customized proprietary control software. In addition, the team built the vehicle from scratch, while many other competitors purchase a vehicle ready for flight.

Key to the team’s first-place win this year was new sensing and artificial intelligence technology that the team has integrated into their vehicle. The vehicle uses the LIDAR data it collects to build and store a detailed map of its environment so that it is continuously learning about its surroundings and reacting accordingly. Once its “map of the world” has been created, the quadrotor cannot only travel from point to point quickly and with less operator oversight, it can also hover accurately in a very precise location. Building a map is more challenging than simpler approaches like wall following but gives the system an advantage in terms of path planning and producing useful feedback to the operators. 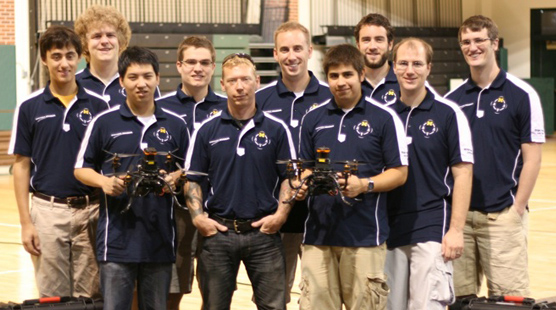 Of the thirteen students who made up this year’s MAAV team, seven are from EECS and six are from Aerospace Engineering. EECS students were essential to designing the system’s electronics, control, sensing, mapping, and decision-making systems.