EECS: Electrical and Computer Engineering
July 5, 2012
The UVIG works with the U.S. Department of Energy to provide a forum for the critical analysis of wind and solar technology.| Short Read

Undergraduate electrical engineering student Rebecca Wolkoff was one of two winners in her category of a 2012 scholarship given by the Utility Variable-Generation Integration Group to further her studies in electric power engineering. 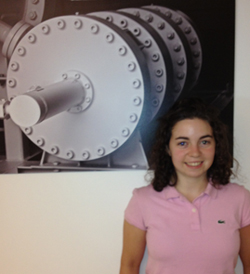 Wolkoff is spending the summer as an intern at General Compression, a company founded in 2006 with the goal of overcoming the inherent problem of on-demand energy from wind, which is intermittent. The company builds what are called Dispatchable Wind farms to produce energy as needed.

She has been working on control issues for a couple projects, and has done some programming and documentation as well.

“Everyone at the company is and quick to share and discuss new ideas,” stated Rebecca. “Knowing that we’re working on projects that will make alternative energy a much more viable power source creates a highly motivated, exciting atmosphere. The people at General Compression have made my summer truly worthwhile.”

The Utility Variable-Generation Integration Group “was established in 1989 to provide a forum for the critical analysis of wind and solar technology for utility applications and to serve as a source of credible information on the status of wind and solar technology and deployment. The group’s mission is to accelerate the development and application of good engineering and operational practices supporting the appropriate integration of variable generation for utility applications through the coordinated efforts and actions of its members, in collaboration with the U.S. Department of Energy, its National Renewable Energy Laboratory and utility research organizations.” [read more]

Until recently, the UVIG was known as the Utility Wind Integration Group (UWIG). In 2011, the Board of Directors voted to change the name to reflect the growth in solar power being integrated into power distribution systems, as well as potential growth in emerging renewable technologies such as wave and hydrokinetic power. [read more]