by Kate McAlpine
Michigan Engineering
June 4, 2012
A contingent of the Detection for Nuclear Nonproliferation Group travelled to Italy to test their detectors for catching bomb-makers.| Medium Read
Enlarge 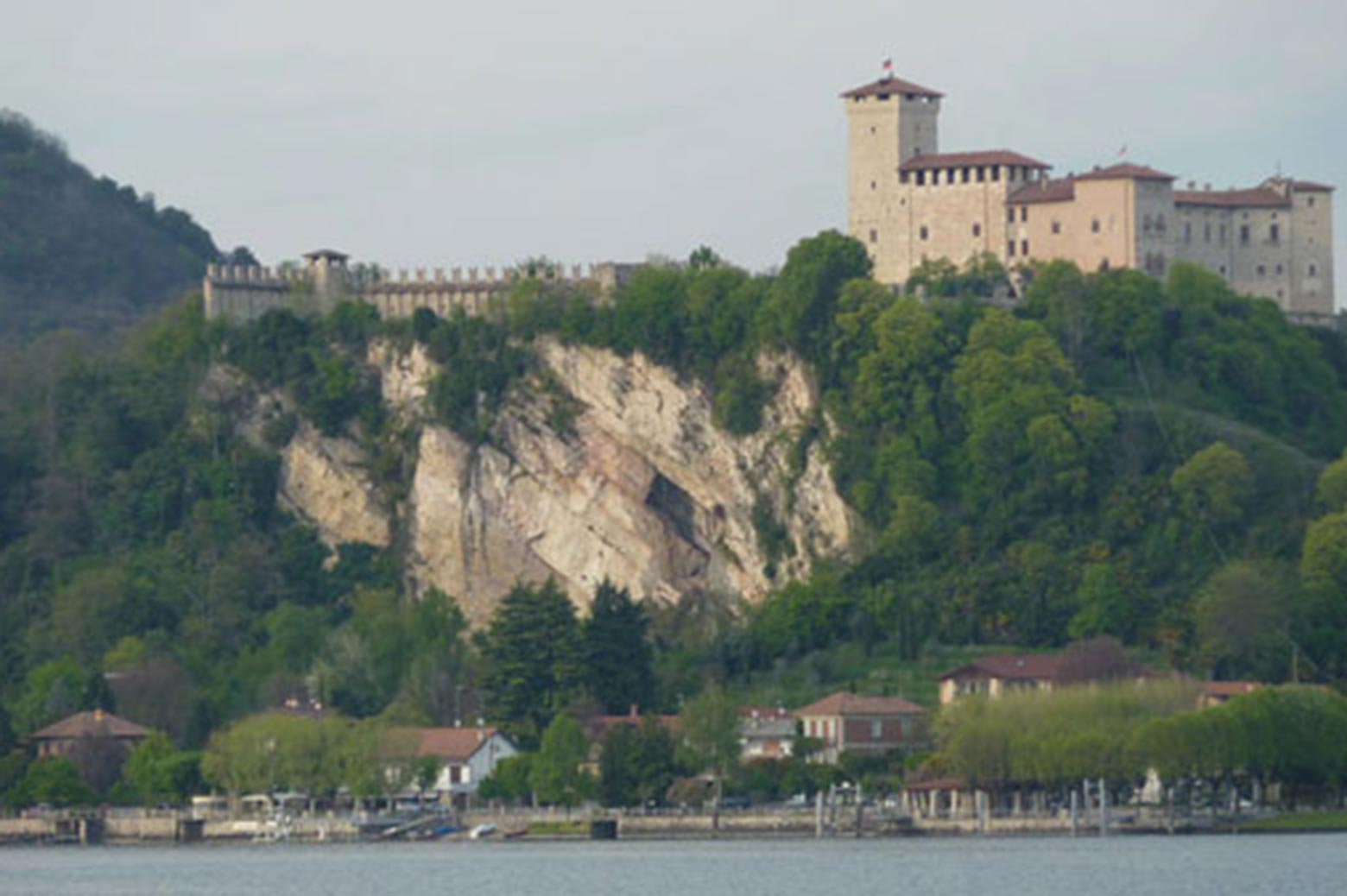 IMAGE:  Angera Castle of Ispra, Italy, is alright, but you should see the local nuclear laboratory. (Photo courtesy of Eric Miller)

When Professor Sara Pozzi of the U-M Department of Nuclear Engineering and Radiological Sciences and her team visit the idyllic town of Ispra, Italy, just south of the Alps on the shore of Lake Maggiore, they don’t come for the food or the scenery. They come for the plutonium.

Along with certain types of uranium, the US government designates plutonium as a “Special Nuclear Material” because in great enough quantities, it could be used to make a nuclear bomb. These materials are carefully controlled, and Pozzi’s Detection for Nuclear Nonproliferation Group (DNNG) is trying to keep it that way. They develop detectors to spot these materials. “You would put them in airports and commercial ports of entry, where ships come in. You can imagine the difficulty of having to scan big cargo containers,” Pozzi explained.

Universities aren’t high-security sites that can keep uranium and plutonium on hand for testing detectors, so in April, Pozzi and two of her graduate students, Jennifer Dolan and Eric Miller, tested detectors at the European Commission’s Joint Research Center, of the Institute for the Protection and Security of the Citizen, in Ispra.

The team designed a highly portable system using commercially-made detectors and electronics. Standard detectors use rare helium-3 to sense neutrons, the neutral particles inside atomic nuclei, which are released when a nucleus spontaneously breaks apart, or fissions. But the mineral-oil-like fluid inside their array can spot the gamma rays produced during fission as well, which are like high-powered x-rays.

Unlike the radiation-sensing material used in one of the group’s previous detectors, the oil is nonflammable, which makes it easy to transport. In fact, the contingent could check their detectors, in a protective case, as ordinary luggage for the journey to Italy.

“They’re also very fast,” said Pozzi – about ten thousand times faster than helium-3 detectors. Her team’s array of four detectors can distinguish neutrons and gamma rays arriving with around a nanosecond, or a billionth of a second, between them. At that speed they can see details of how the plutonium nuclei break apart. “It allows us to get a more robust signature for the material,” she added.

Weighing up the plutonium

While the team commissioned a company to make the detector components, they developed their software in-house. Miller and Dolan each wrote their own versions to extract different information from the data. For now, they run their programs after the measurement, but one of their goals is to develop software that processes data in real time.

Dolan’s program examines a short window of time after the detector registers a neutron, just 400 nanoseconds long. She looks for how many more arrive in that timespan. “If I can measure these little bursts of neutrons, I know there’s a fissile material,” said Dolan. The number of neutrons in the burst lets her know what proportion of the material is plutonium-239, which can be used in reactor fuels or weapons.

Miller’s program is aimed at bomb-making materials. He looks for “multiplications” of neutrons, where one initial neutron hits an atomic nucleus that fissions and generates more neutrons. Those neutrons cause other nuclei to fission, releasing still more neutrons. A runaway reaction would lead to an explosion, but in the raw materials for weapons, the multiplying neutrons fizzle out. “If you can see a multiplication, you know you have something interesting,” said Miller.

The test samples ranged from fuel-like compounds, which were approximately 11 percent plutonium-239 by weight, to weapons-grade plutonium metal, 75 percent plutonium-239 and above. The detectors can also give information about the type and thickness of radiation shielding, such as lead or steel for stopping gamma rays, or the neutron-catching plastic polyethylene. 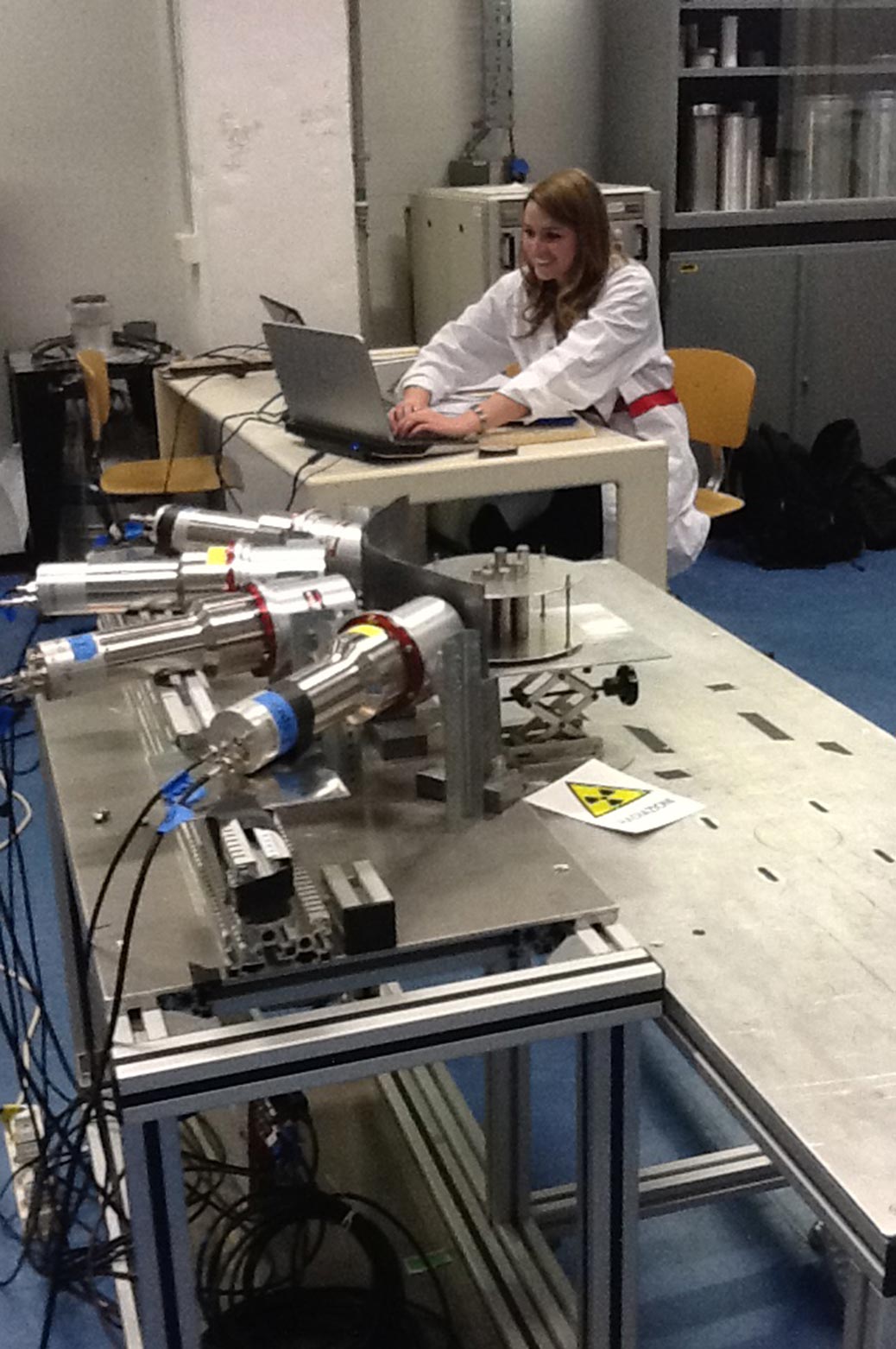 IMAGE:  In the foreground, four detectors form an arc around a plutonium oxide sample. Jennifer Dolan checks how fast the radiation is coming to find out how long she should let the experiment run in order to get enough data. (Photo courtesy of Sara Pozzi)

The team is pleased with the detector’s performance. It is able to identify multiple neutrons coming in quick succession that would blur together in a helium-3 detector. However, in a laboratory with an abundance of radioactive material, their system was telling them more than they wanted to know.

“You have a lot more gammas than you would in our lab,” said Pozzi. Since most of them came from other sources, they didn’t say anything about the plutonium sample. Pozzi’s team can revise their software to strip out the stray gamma rays by looking for combinations, such as a neutron and a gamma ray arriving together, or a pair of gamma rays.

Testing their real detectors also lets them check on the performance of their virtual detectors and samples. Because the team has to travel to places like Italy, Idaho, and New Mexico to test their detectors with special nuclear materials, they spend a lot of time and energy on computer simulations that describe how their detectors will react to neutrons and gamma rays from these sources.

“Our simulations were accurate within 10 per cent, which is satisfactory, but we’re always looking for ways to improve,” said Pozzi. The recent tests will help the team focus their next efforts.