EECS: Electrical and Computer Engineering
June 26, 2012
The interdisciplinary team went into the competition with a new electrical and vision system, and an advanced control system.| Short Read
Enlarge

IMAGE:  The addition this year of a Fiber Optic Gyro helped Serenity navigate the bouys with ease.

The team was anything but calm when Serenity, UM::Autonomy‘s robotic boat, took first place for the second time in its four years of competition at the RoboBoat competition, formerly known as the International Autonomous Surface Vehicle Competition, held June 20-24, 2012.

The interdisciplinary team went into the competition this year with a new electrical and vision system, and an advanced control system. So while the competition is in water, it takes a heavy dose of EECS know-how to pull off a win.

The RoboBoat Competition “challenges student teams to design and build autonomous surface vehicles (ASVs) that operate under rules of the waterway. This includes littoral area navigation, channel following and autonomous docking. This is typically done with computer vision, multi-sensor fusion techniques, proactive and reactive path planning, and machine learning approaches using embedded systems within the vehicle.” It is sponsored by the Association for Unmanned Vehicle Systems International Foundation and the Office of Naval Research. [more info] 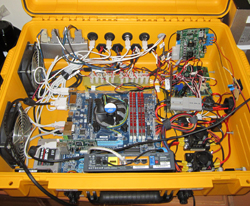 Last year, the team was awarded the “Edge of the Envelope” award in recognition of its innovative computer system. An important improvement in this year’s design was the use of a Fiber Optic Gyro (FOG).

“One of the greatest challenges of being on the water is having your boat drift around,” said electrical engineering major Michelle Howard. “It makes it very difficult to navigate when your boat has to account for motion that it cannot control. This FOG helps us with that problem.” [“Student robotic boat Serenity going for gold,” by Jennifer Judge Hensel, June 6, 2012]

The students also designed a Simultaneous Localization and Mapping system, which allowed the boat to navigate the bouys in the water with ease, even in difficult lighting conditions.

Team UM::Autonomy was the only competing team to attempt two of the four available challenges, and the feat was so impressive they were being cheered on to victory by the other teams. Read more about this year’s competition. 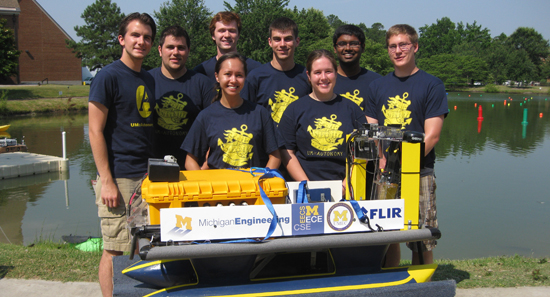