by Catharine June
EECS: Electrical and Computer Engineering
May 3, 2012
This award is bestowed on a young ECE faculty member on the basis of teaching, research, and service, as well as a record of innovation and leadership.| Short Read
Enlarge 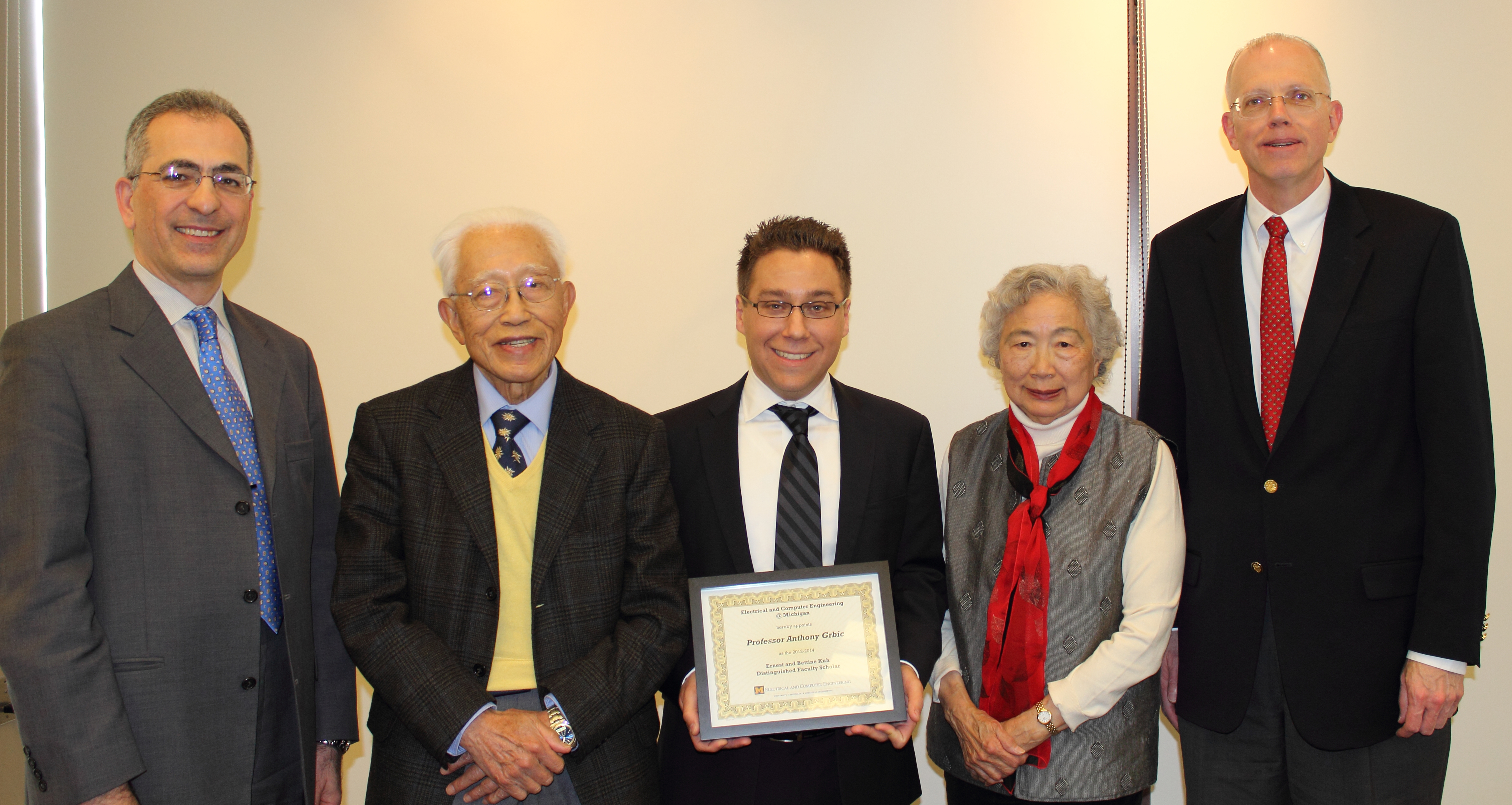 This award is bestowed on an outstanding young faculty member in the ECE Division on the basis of teaching, research, and service, as well as a record of innovation, leadership, and citizenship. In most cases the recipient will be at the level of associate professor.  The award and its title will rotate every two years.

The first recipient of the Ernest and Bettine Kuh Distinguished Faculty Award is Prof. Tony Grbic. Tony’s record since he came to U-M in 2006 is exemplary. His research interests lie in the broad area of applied electromagnetics, and include metamaterials (subwavelength-structured electromagnetic materials), printed antennas, microwave circuits, wireless power transmission, and analytical electromagnetics.

Prof. Grbic was very honored to receive the award, which he said will positively impact his research and provide assistance to his students. He also added that while he was used to the art of multi-tasking, the birth of his twin sons showed him he had been a mere amateur in this regard.

Khalil Najafi, Schlumberger Professor of Engineering and Chair of Electrical and Computer Engineering, stated, “by establishing the Ernest and Bettine Kuh Distinguished Faculty Award, Ernie and Bettine are investing in people, and there is truly no greater investment.”

Introducing Prof. Kuh, David C. Munson, Jr., the Robert J Vlasic Dean of Engineering, said “It is impossible to overstate Ernie’s contributions to electric circuit theory and computer-aided design for VLSI circuits and systems.” He talked about being part of a circuits group in his early years, when the field of Signal Processing was still in its infancy, and recalled, “Ernie was a legend in that group, and he still is.” 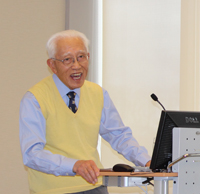 Prof. Kuh offered a special lecture the next day for faculty and students. He talked about the evolution of the field and offered personal anecdotes of many of his contemporaries who, like him, helped define their generation. Many of these individuals were researchers during the same time at AT&T Bell Labs before the breakup in the early 80’s.

Prof. Kuh is a highly distinguished alumnus of the department, graduating with his bachelor’s degree in electrical engineering in 1949, and is considered one of the fathers of electronic design automation (EDA).

At the close of the talk, Ernie and Bettine were presented with a true blue gift – an official U-M football helmet! After recovering from the shock, Bettine let us know that she knew exactly where to put the helmet – prominently displayed where everyone who visited them could see it. 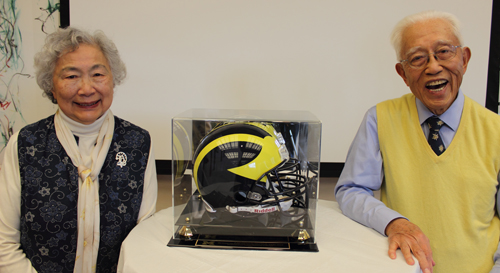 IMAGE:  Helmet Inscription: In Appreciation for the Endowment of The Ernest and Bettine Kuh Distinguished Faculty Scholar Award For Electrical and Computer Engineering at Michigan 2012

Prof. Grbic has received an NSF CAREER Award, an AFOSR Young Investigator Award, and a Presidential Early Career Award for Scientists and Engineers (PECASE). In 2011, he was the recipient of an Outstanding Young Engineer Award from the IEEE Microwave Theory and Techniques Society, a Henry Russel Award from the University of Michigan, and a Booker Fellowship from the United States National Committee of the International Union of Radio Science (USNC/URSI).

He developed a new graduate course, Electromagnetic Metamaterials, and revised the Major Design Experience course, EECS 430 (Radiowave Propagation and Link Design). His students, including undergraduate students he has worked with, have received numerous awards. He is Associate Editor for IEEE Antennas and Wireless Propagation Letters, Vice Chair of the Trident (Antennas & Propagation) Chapter within the IEEE Southeastern Michigan Section, and Technical Program Co-chair of the 2012 IEEE International Symposium on Antennas and Propagation and USNC-URSI National Radio Science Meeting.

Before coming to U-M for his undergraduate degree, Prof. Kuh studied at Shanghai Jiao Tong University. He earned his BSE degree in electrical engineering in 1949 from Michigan, his master’s degree from MIT, and his PhD degree from Stanford University in 1952. He was a researcher at AT&T Bell Labs, and joined UC-Berkeley as a faculty member in 1956. From 1968-1980 he served terms as Department Chair and Dean of the College of Engineering.

Dr. Kuh wrote widely-used textbooks on circuit theory and synthesis. He was inducted into the Silicon Valley Hall of Fame in 2008 and has received numerous additional awards and honors, including the EDAC Phil Kaufman Award, the IEEE Education Medal, the Kirchhoff Award, and the ASEE Lamme Medal. He received the CoE Alumni Medal in 2009. He is a fellow of IEEE and AAAS, and a member of the National Academy of Engineering.