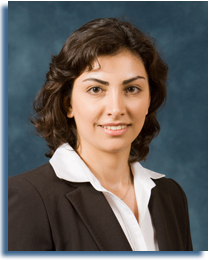 Dr. Jarrahi is taking a novel approach to monitor the carrier dynamics in semiconductors, using a multi-spectral plasmonic grating which enables optical pump terahertz probe spectroscopy at the nanoscale.

An expected outcome of Prof. Jarrahi’s research will be increased physical perspective for utilizing unique functionalities of nanoelectronic and nanophotonic devices. It will offer a valuable understanding of the fundamental physical limitations of ultrafast operation of nanoscale devices and a more realistic prediction for the ultimate extent of transistor scaling roadmap in the future.

She is the recipient of numerous awards, including the NSF CAREER Award, the DARPA Young Faculty Award, Robert Bosch FMA fellowship, and best-paper awards at the International Microwave Symposium.

Prof Jarrahi received her Ph.D. degree in electrical engineering from Stanford University, and joined Michigan as a faculty member in 2008.