Two teams in the Fall 2011 EECS 413 (Monolithic Amplifier Circuits) Design Contest came up with winning designs for their final class project: an energy harvesting circuit for implantable devices and sensor networks, and a high efficiency audio amplifier for mobile applications.

Each year Prof. Michael Flynn adds to the students’ motivation by arranging for an in-class contest that is sponsored by industry. Thanks to this year’s sponsorship by Cirrus Logic, the students will share prize money in the amount of $3K.

The team described their project:

Energy is becoming one of the major constraints in many modern applications such as implantable biomedical devices and Ubiquitous Sensor Networks (USN).  Conventional power supplies such as batteries are not always the best option when battery-replacement is difficult to manage.  As power consumption of CMOS circuits continues to decrease, energy harvesting from various sources as a replacement for batteries is becoming a more viable option. 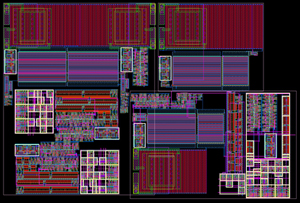 Our team implemented an energy harvesting circuit that interfaces with a thermoelectric generator (TEG), a device used to convert temperature gradients into electric potential at 25 mV/K.  The energy provided from our circuit could be used to directly power body-wearable devices by using the temperature gradient between the human body and environment.  Our project was designed to work with a 3 K temperature difference, corresponding to a 75 mV source.

Our design utilized three separate submodules to boost VDD up to 1.8 V and store the excess energy onto a capacitor for later use.  Through the use of two boost converters and a buck converter, we were able to regulate an output voltage to 1V that is independent of the external load.  This design used digital control to achieve zero-current switching – improving the maximum system efficiency. 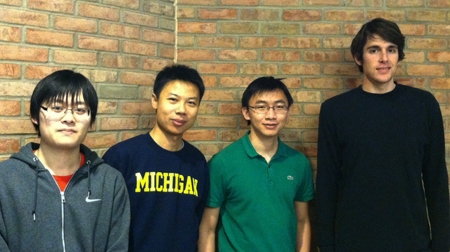 The team described their project: 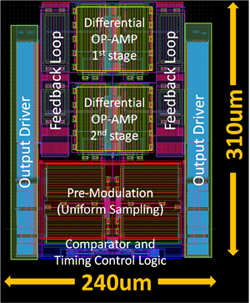 Aside from power efficiency, the desire for high power supply rejection ratio (PSRR) and low total harmonic distortion (THD) has furthered the development of closed-loop Class-D architectures. This project employs a closed-loop architecture to achieve higher PSRR, lower THD, and higher SNR. The fixed closed-loop gain provided by the global feedback provides the added benefit to against noise from process variation, supply jitter and temperature fluctuation. This circuit is implemented in 0.13 μm CMOS technology with a 0.075mm2 core area and the measured THD can be as low as -108dB while the SNR is 117dB.

Reflections about the project

This was our first attempt at designing a fully-differential closed-loop Class-D audio amplifier. As we learned more from EECS 413, we identified various design challenges such as stability, frequency compensation, and feedback. By integrating the pulse-width modulation and filtering blocks into a closed-loop system we achieved high performance with acceptable power consumption. Although the system architecture was quite complex and frustrating at times, this was a great experience that made us better analog designers.

An interdisciplinary team of faculty created a new introductory course in robotics that is designed for inclusivity by focusing on linear algebra instead of AP calculus, opening it up to freshman students with a broad mathematical background.| Short Read
Related