EECS: Electrical and Computer Engineering
January 19, 2012
“We’re excited to be adding Veo to the measures we already have in place to ensure that we get diagnostic images using the lowest amount of radiation possible."| Medium Read
Enlarge 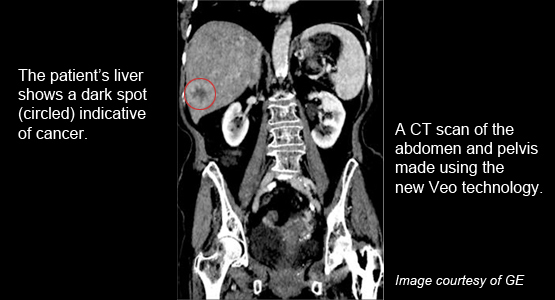 A technological breakthrough is allowing the University of Michigan Health System to be the first teaching hospital in the U.S. to perform some CT scans using a fraction of the radiation dose required for a conventional CT image.

Over the past decade, U-M scientists have contributed to the research behind the new GE Healthcare technology, known as Veo.

“Reducing patients’ radiation exposure is a high priority for us,” says Ella Kazerooni, M.D., M.S., professor of radiology at the U-M Medical School. “The radiation dose for a standard chest CT is equal to about 70 chest x-rays. In comparison, a chest CT using Veo can use a radiation dose equivalent to just one or two chest x-rays.”

Doses for scans using Veo, however, will vary depending on factors like the size of the patient, the part of the body being scanned, and the diagnostic task, Kazerooni notes.

Veo was installed on one CT scanner at U-M in late 2011 and the Health System plans to offer the technology more widely in the future. Veo is already in use in Europe, Canada and Asia.

CT, or computed tomography, uses X-rays to diagnose and monitor a variety of health conditions such as cancer, complex bone fractures, blood clots and clogged coronary arteries. The use of CT scans has increased in recent years, leading to concerns about increased lifetime radiation exposure, which may raise one’s risk of developing cancer.

To a trained radiologist like Kazerooni, an image made using Veo looks slightly different than a conventional CT image.

“I might describe it as a little waxy looking,” she says. “But the real question isn’t whether the picture is as pretty, but whether we can see the things we need to see and get the critical information from an image using a much lower dose of radiation. And from what we’ve seen so far, the answer is, yes we can.”

Doctors at U-M stress that Veo is just one component of ongoing efforts to minimize radiation exposure for all patients. Other approaches include using non-ionizing radiation methods like ultrasound and MRI whenever possible; employing protocols that tie radiation dose to a patient’s size (smaller patients require less radiation); and carefully selecting and training CT technologists.

“We’re very excited to be adding Veo to the measures we already have in place to ensure that we get the diagnostic images we need to treat our patients using the lowest amount of radiation possible,” says N. Reed Dunnick, Fred Jenner Hodges Professor of Radiology at the U-M Medical School and chair of the Department of Radiology.

Initially, Veo will be available to a limited number of adult patients because the technology is equipped on only one scanner. U-M plans to offer Veo more widely as it upgrades the seven compatible CT systems at the new C.S. Mott Children’s Hospital and University Hospital campus.

Most of the CT scanners at the University Hospital campus and satellite clinics already employ low-dose technologies and the Department of Radiology is pursuing ongoing efforts to keep radiation doses for all patients to a minimum. 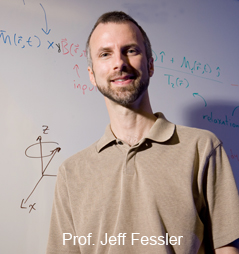 Veo is not a new type of machine, but a new way of processing data, explains Jeff Fessler, Ph.D., a U-M professor in the departments of Electrical Engineering, Computer Science, Radiology and Biomedical Engineering. Using a technique called Model-based Iterative Reconstruction (MBIR), the technology employs sophisticated algorithms to squeeze more information out of the existing X-ray data.

“It uses a less idealized model of the data collected by a CT scanner, so we need less radiation to make a good picture,” says Fessler whose research group has been collaborating with GE on the project for about a decade. “But these more accurate models require more computation.”

A CT scan takes pictures of 64 cross-sections of the body at a time, each less than 1 millimeter thick. A typical scan consists of thousands of these images.

“It’s a staggering amount of data,” he says. “And doctors can‘t just look at the raw data – they need software to process it into a meaningful image.”

“So, we’re not going to use it on someone in the Emergency Department or our inpatient units who has an medical need to get the results back quickly,” Kazerooni says.

Still, the wait is a lot better than a few years ago, when it would take days to process such massive amounts of data.

“The algorithms are still slower than we want them to be, but we’re already working on developing a next generation that will be faster and make it easier for them to be used more widely,” Fessler notes.

In 2010, Fessler, Kazerooni and their colleagues at U-M were awarded a $1.9 million grant from the National Institutes of Health to work with collaborators from GE Global Research to develop MBIR methods for improving lung CT imaging.

“By developing this next generation technology alongside world class research universities like the University of Michigan, we’re able to help physicians deliver remarkably clear images at unprecedented low dose levels for their patients,” says Steve Gray, vice president and general manager of CT and Advantage Workstation for GE Healthcare.