EECS: Electrical and Computer Engineering
November 17, 2011
Birdsall's work was in sensory psychology, psychometrics, and underwater acoustics, and he often helped other researchers apply signal processing theory to their own research.| Medium Read
Enlarge 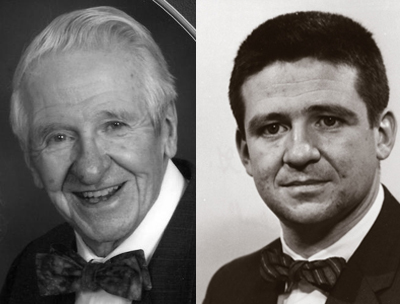 Professor Emeritus Theodore G. Birdsall was recently honored with the Silver Medal in Signal Processing in Acoustics by the Acoustical Society of America, “for contributions to signal detection theory and development of coded sequences in underwater acoustics.” He is only the second recipient of this award. 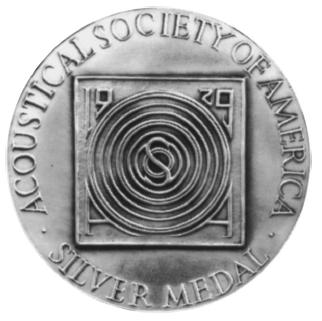 The Silver Medal is presented to individuals, without age limitation, for contributions to the advancement of science, engineering, or human welfare through the application of acoustic principles, or through research accomplishment in acoustics, according to the Society.

Prof. Birdsall established an international reputation in the field of signal detectability theory. His research focused on two basic areas: signal detection and estimation (the statistical theory of extracting information from noisy electronic signals) and physical measurements in underwater acoustics. His work was relevant to sensory psychology, psychometrics, and underwater acoustics, and he often helped other researchers apply signal processing theory to their own fields of research. He is credited by some with co-inventing the receiver operating characteristic (ROC) curve.

He was a member of the Office of Naval Research’s Underwater Sound Advisory group in 1966, and was elected as a fellow of the Acoustical Society of America in 1989 for his “contributions to the science of acoustical signal processing.”

During the 1990’s, Prof. Birdsall was involved with an international consortium working on global warming initiatives. His work with the consortium on the use of underwater acoustics as a means of estimating changes in the average temperature of the oceans was described in a 1991 announcement by the National Academy of Science as “a remarkable achievement.”

He retired from the University in 1996, after a distinguished career of 42 years.

A special tribute to Prof. Birdsall was written by James F. Lynch and Robert C. Spindel, and published in the Journal of the Acoustical Society of America. The following is taken from that article:

“The first thing you notice about Ted Birdsall is his bowtie. Then you notice that he is a quiet, thoughtful listener, perfectly happy to hear what others have to say first, carefully assessing their technical problems and how he can contribute to solving them. Then you witness his focus and competence, driving straight to frequently brilliant solutions. Ted is a self-described “interface man,” or as we would say today, an interdisciplinary specialist. Throughout his long career he focused on bringing the power of signal processing to bear on a wide variety of problems, some in seemingly unrelated areas such as sensory psychology and underwater acoustics, and in so doing he developed new and powerful signal processing tools and techniques. Ted is also a gifted teacher, and in addition to his research papers and contributions, a large part of his legacy is the students (and colleagues) he has educated and inspired.”

The article also includes greater details about his specific research contributions. In summary:

“First is the (probable) co-invention of the receiver operating characteristic (ROC) curve along with the late Wesley Peterson and its (certain) subsequent development and popularization as an important research tool. Second is the application of detection and estimation theory to sensory psychology and psychometrics with John Swets and Wilson Tanner, and third is the introduction of maximal length sequences (m-sequences) into ocean acoustics to boost signal gain.”

Prof. Birdsall received his B.S.E. (Mathematics), M.S. (Mathematics), and Ph.D. (Communication Sciences) degrees in 1950, 1952, and 1966, respectively, all from U-M. In 1954 he began his service at the University as a research mathematician at the Cooley Electronics Laboratory (formerly the Engineering Research Institute), and was promoted to associate professor in 1967, and professor in 1970. He served as director of the Cooley Electronics Laboratory and the Communications and Signal Processing Laboratory.