Silvio Savarese authors book in the field of Computer Vision 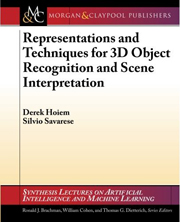 Prof. Silvio Savarese has co-authored the book, Representations and Techniques for 3D Object Recognition & Scene Interpretation, with Prof. Derek Hoiem (U. of Illinois). The book is part of the series, Synthesis Lectures on Artificial Intelligence and Machine Learning, published by Morgan & Claypool Publishers.

“One of the grand challenges of artificial intelligence is to enable computers to interpret 3D scenes and objects from imagery. This book organizes and introduces major concepts in 3D scene and object representation and inference from still images, with a focus on recent efforts to fuse models of geometry and perspective with statistical machine learning.” [more about the book on Amazon.com]

Prof. Savarese directs the Computer Vision Group, whose focus is the analysis and modeling of visual scenes from static images as well as video sequences. The algorithms developed in the group enable the design of machines that can perform real-world visual tasks such as autonomous navigation, visual surveillance, or content-based image and video indexing.

Earlier this year, he was awarded an NSF CAREER grant for his research project, “Toward Discovering the 3D Geometrical and Semantic Structure of Objects and Scenes.”