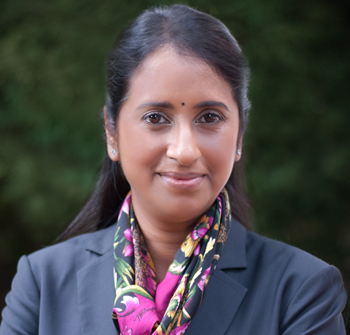 “It’s a dream job to set up a new research lab at a company known for innovation, especially when it’s in your home country,” said Dr. Meera Sampath (PhD EE:S ’95) of the facility she helped establish and now directs in India. Called the Xerox India Innovation Hub, it is unique among Xerox’s five research facilities – and that’s because Meera and her team had something exceptional in mind for this facility. Achieving creative solutions is characteristic of the way Dr. Sampath gets things done.

As a PhD student at Michigan, Meera wanted a simple and automated way of figuring out the root cause when something went wrong with an industrial system, specifically, one that was modeled as a discrete event dynamic system. This is a special and important class of systems whose behavior can be described as a chronological sequence of events. She saw that desecrate event systems researchers had not yet been looking at the problem of failure diagnosis, and that while researchers in separate disciplines were looking at diagnosis of problems in industrial systems, they were not looking at discrete event systems.

The papers she would write with her advisors Prof. Stéphane Lafortune and Prof. Demos Teneketzis resulted in a new area of research, namely the diagnosis of discrete event systems, that is very rich today. These papers continue to rank high in major citation indexes.

Coming to Michigan from India may have dropped Meera into a new continent, but she felt right at home. “I had very good friends and excellent relationships with the faculty. It was a very warm and welcoming place. Being in the EECS Department gave me a very broad exposure to people from different places, and people who were extremely good at what they were doing. I remember many late evenings in the EECS building taking with friends and working in the lab. It was a wonderful learning environment.”

“My PhD advisors taught me how to be a researcher,” she added, “and to communicate effectively. I also learned from them how to handle issues of fairness and inclusiveness, and the importance of taking time to listen to others, to encourage them, and develop the people you work with.”

Aside from her studies, Meera enjoyed the bookstores, the parks, central campus, and especially the movies on Top of the Park. Topping it all was her wedding, followed by the birth of her first child at the University of Michigan hospital.

Before graduating, Dr. Sampath attended a Control Series Seminar where she approached two senior Xerox researchers to talk about a job posting she had seen just the day before. “The next thing I know 15 years have passed and I’m still at Xerox,” she stated.

Meera started her career at the xerox research lab in Webster, NY, where she applied the results of her doctoral work to printing systems. She went on to hold a variety of titles and positions including Principal Scientist, Leader of the diagnostics competence area, Manager of Strategy, and later Group Leader to determine what Xerox’s expansion strategy should be in the emerging market. Her group successfully proposed the new facility in India, and Meera was named Director.

“While open innovation is not new to Xerox, we wanted this new research lab to be a model for open innovation and collaboration,” explains Dr. Sampath. It is called a “hub” because it brings together researchers from all five of Xerox’s global labs as well as other researchers and entrepreneurs from the best academic institutions and research labs in India. The goal for the India hub was to have at least 50% or more of the research done through partnerships with outside individuals and institutions.

Students – Get a Global Perspective

Meera is excited about all that she is doing, but when asked what advice she would want to share with students, she became particularly animated about the importance of a global perspective. She helps introduce children in her own community to another culture by teaching her native language, Tamil, to classes of students. She also directs plays and musicals involving the students, all performed in her native language.

“Companies are looking for global leaders. Globalization means learning to work with the best people around the world,” she stressed. “A lot of today’s most challenging problems are in the merging world. It is critical to bring together the best brains, whether they are in India or China or Michigan – and have them work together to solve the most challenging problems of today. Whether it’s through appropriate coursework, training programs, or internships overseas, students should give themselves global exposure.”