Ms. Duan described the research: “This work is motivated by microwave subsurface remote sensing applications, especially mapping of the subsurface or root-zone soil moisture in bare or vegetated areas which provides one of the critical components in modeling the global water and energy cycle in support of global climate change studies. It also improves both short-term and long-term weather forecasts.” 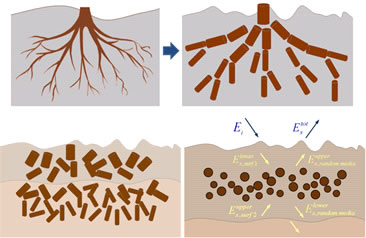 “In such applications, low frequency radar systems are used, which receive scattered signals from both scatterers above the ground, such as vegetations and top soil surface, and below the ground, such as subsurface interfaces, vegetation roots, rocks, and ice particles. To be able to estimate the scattering contribution from subsurfaces and what is embedded in them, we modeled the vegetation roots and other inhomogeneities as discrete random media of spherical or cylindrical scatterers as well as cylindrical clusters, and solved their 3D full wave scattering using a numerically efficient and accurate new technique. We also experimentally validated the random-cylinder solution in the lab.”

“This is the first time that vegetation roots are considered in the ground scattering model. The results show that the root density, distribution, and dielectric property indeed have a significant impact on the radar signals, especially on the cross-polarization components.”

Ms. Duan received her B.Eng. degree in communication engineering from Shandong University, Jinan, China in 2004 and M.S. degree in microelectronics, communications technology from the University of Ulm, Ulm, Germany in 2006. From 2006 to 2007, she was with the Test and Measurement Division, Rohde & Schwarz, Munich, Germany, as a development engineer for vector network analyzer. She returned to U-M for her M.S. degree in applied mathematics (2010), and is currently working toward the Ph.D. degree in the Radiation Laboratory. Her research interests include forward and inverse modeling of electromagnetic scattering from layered rough surfaces with or without buried objects, radar system design and radar measurements of vegetation and ground variables.