The two-legged robot named MABEL can now recover from a stumble like a person, making her the world’s first robot with a trip reflex, says Prof. Jessy Grizzle. The fastest bipedal robot with knees can now step up onto a platform that’s in her path. She has no cameras, so she uses a sense of touch, so to speak, to keep steady footing.

MABEL received significant world-wide attention when she became the fastest bipedal robot with knees in 2011. We invite you to watch some of the videos, and read the articles on the right for additional information. 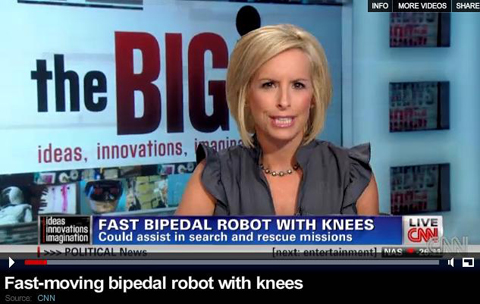 Jason Drubner and Niki Noto visited MABEL September 8, before the Michigan-Notre Dame game [35-31 – Go Blue!!!] She showed off a bit and managed a touch down before injuries sidelined her. WatchDrubner’s interview of Denard Robinson after the game

For some humor:
MABEL learning to navigate rough ground (breaks a leg)
Robot Versus Plywood, Who Ya Got?(Gamma Squad – 5/27/10)

Michigan Engineering: A new life for MABEL at the Chicago Field Museum (7/31/14)

IEEE Spectrum: MABEL Bipedal Robot is Fast Enough to Run You Down (8/16/11)

CBS News: Meet Mabel: The robot that does a 9-minute mile

MSNBC: This robot can run – it’s the fastest one ever

Gizmodo: A Sprinting Robot That Heralds The Age of the Terminators

In the News
Popular MechanicsOct 17, 2019
Meet the super robots that are about to lap the world’s fastest humans