Two teams earned prizes in the senior-level major design experience course, EECS 425: Integrated Microsystems Laboratory, thanks to the sponsorship of the Center for Wireless Integrated MicroSystems (WIMS). In this course, taught this past term by Prof. Euisik Yoon, students designed and fabricated a complete integrated microsystem using equipment in the Lurie Nanofabrication Facility. The winning projects were determined by WIMS industrial partners and WIMS faculty and staff. WIMS members are able to view the project papers and presentations online. 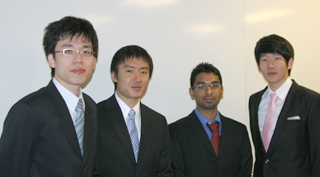 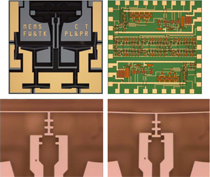 For their project, the students presented the application, design and simulated/testing results of an electro-thermally actuated, two degree-of-freedom micro-robotic arm as well as its interface circuit controller. Robotic manipulation at micro meter scales is a promising technology for building structures, characterizing, and relocating micro scale blocks. One of the most promising potential applications for such a device is cell manipulation in biomedical and biotechnology applications.

The students based the fabrication of their MEMS device on a silicon-on-glass process. A micro-gripper is connected to a robotic arm which is able to reach and grab an object, and return to its original position with the object. Driving voltage is limited to 6 V to avoid overheating the silicon structures, and the total power consumed by the device is 0.47 W. The overall chip size for both MEMS and interface circuitry is 2 mm x 2 mm. 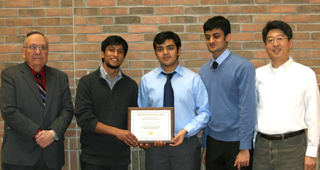 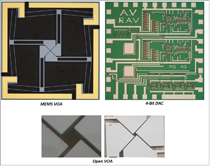 In this project, the group realized a MEMS iris-type Variable Optical Attenuator (VOA) to attenuate light intensity. A VOA is a device designed to attenuate an intensity or power level of an input optical beam in a controlled manner to produce an output optical beam with different attenuated intensities. In fiber optic communication systems, VOAs are widely employed to regulate optical power levels to prevent damages to the optical receivers caused by irregular power variations. Miniature VOAs based on controllable aperture have many applications, including communications and imaging systems.

“By using our MEMS VOA,” stated Ravish, “the output intensity of the light can be set to a desirable level by varying the opening of the four blades and letting in only a certain amount of light. The ingenuity of the design lies in the synchronous movement of the blades as the power is applied, creating a pupil through which light passes. The opening of the shutter and thus the output optical intensity of the VOA device can be varied by up to 16 different values from 0.25-0.76 by using our 4-bit Digital-to-Analog Converter (DAC) interface circuit.”

In the photo above, the students are displaying a Recognition Award for teammate Matthew Stites, who passed away in the middle of the semester. Matthew’s teammates honored Matthew and his contributions to the project with this certificate. The Department offers its sincere condolences to Matthew’s family and friends.