EECS: Electrical and Computer Engineering
April 27, 2011
Bell is investigating how to use an electrodynamic, propellantless propulsion concept to push against the Earth's magnetic field in order to maneuver satellites and counteract drag.| Short Read
Enlarge

Iverson describes his project: “There is a new novel concept of creating extremely small satellites that are no bigger than a large semiconductor wafer chip. They offer the unique potential to function both as stand-alone satellites or as a distributed swarm, where they could provide simultaneous, in-situ or remote observations. One challenge for these satellites is that they can behave like a leaf in the wind and be rapidly deorbited in a few hours to a few days. 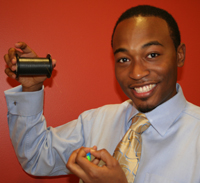 IMAGE:  Iverson is holding a 100-micron diameter wire that could be the core of his propulsion system. Ultimately, he will insulate a several meter long section of thin wire and use it to carry current collected from Earth's ionosphere.

I am investigating how to use an electrodynamic, propellantless propulsion concept to push against the Earth’s magnetic field using long, straight wires. If successful, we may not only be able to counteract the drag, but to maneuver these small satellites as well. The propulsion technology also shows potential to operate as a diagnostic probe, antenna, and beam for gravity gradient stabilization.

ChipSat wafers have a high area-to-mass ratio, so they have a short orbital life in low Earth orbit of no more than a few days due to atmospheric drag. My investigation explores the use of a short, semi-rigid electrodynamic tether (EDT) to ensure propellantless propulsion without contributing significantly to ChipSat mass, onboard power, or atmospheric drag relative to thrust.”