EECS: Electrical and Computer Engineering
January 12, 2011
There is potential for Savarese's work to be transformative in applications such as autonomous navigation, robotics, and 3D automatic modeling. | Short Read
Enlarge 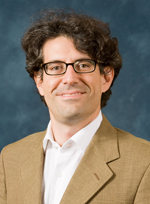 Silvio Savarese, assistant professor of Electrical and Computer Engineering, was recently awarded an NSF CAREER grant for his research project, “Toward Discovering the 3D Geometrical and Semantic Structure of Objects and Scenes.”

The goal of this research is to develop an intelligent visual system capable of understanding both the 3D spatial and semantic structure of complex scenes from images. Once the 3D scene layout is inferred, it is easy to make judgements about what you can do with the scene and its objects: for example, you can sit on an object that looks like a chair.

Currently, object recognition methods typically describe scenes as a list of class labels (e.g., a chair, a desk), but do not account for the 3D spatial structure. Also, methods for object and scene 3D modeling (e.g., SfM) produce accurate metric reconstructions of objects and scenes but are unable to infer the semantic content of its components. 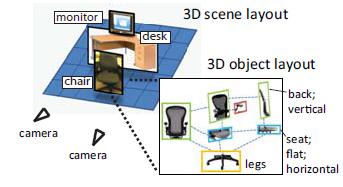 There is tremendous potential for this work to be transformative in applications such as
autonomous navigation, robotics, 3D automatic modeling of urban environments, automatic monitoring of buildings in construction sites, and multi-sensors ubiquitous exploration in post-disaster scenarios. In addition, the new methods are expected to aid in the design of technology that will assist people with reduced functional capabilities due to aging or visual impairments.

Prof. Savarese directs the Computer Vision Group, whose focus is the analysis and modeling of visual scenes from static images as well as video sequences. The algorithms developed in the group enable the design of machines that can perform real-world visual tasks such as autonomous navigation, visual surveillance, or content-based image and video indexing. One of the educational goals is to involve undergraduates or high school students in projects whose primary application goal will be to develop technology for people with disabilities.

The CAREER grant is one of NSF’s most prestigious awards, conferred for “the early career-development activities of those teacher-scholars who most effectively integrate research and education within the context of the mission of their organization.”