by Nicole Casal Moore
Michigan Engineering
November 17, 2010
North Campus offers more than just buildings and space for classrooms. It's an art museum, with sculptures and murals around every corner.| Short Read
Enlarge 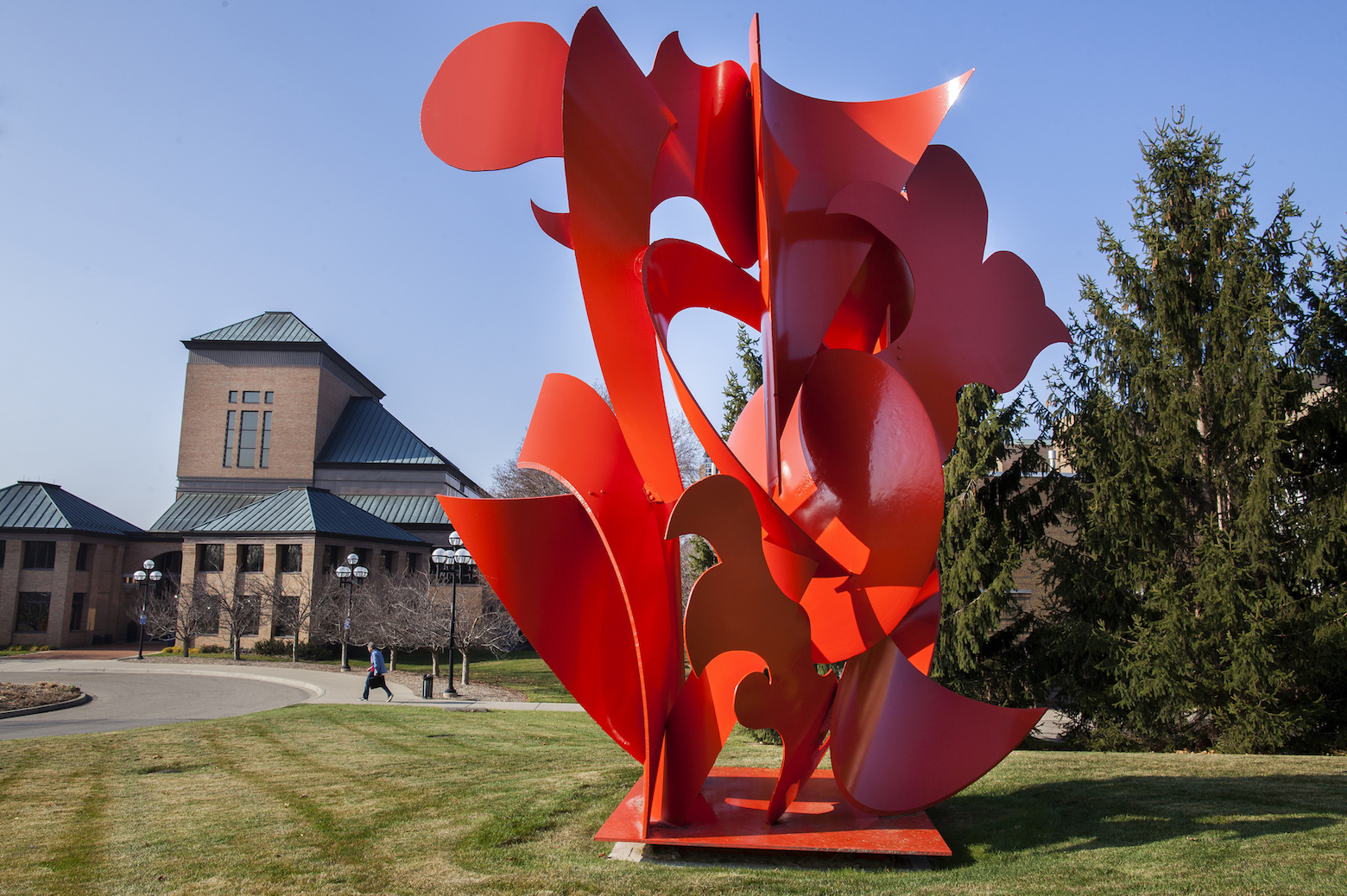 North Campus offers more than just buildings and space for classrooms. It’s an art museum, with sculptures and murals around every corner. Fittingly, many of the works on display around Michigan Engineering speak to the themes of science, industry or invention.

Take the campus’s recent addition The Order of the Spheres. Artist Roberto Juarez painted the mural on the dome of the Aerospace Engineering Department’s wind tunnel and completed the project in October 2010. An artist whose work is often said to allude to wind, Juarez describes the overlapping circles in this mural as representing velocity and wind.

Also adjacent to the Aerospace Engineering Department is the equally appropriate Wave Field. The field was designed by architect Maya Lin, who is best known for desiging the Vietnam Memorial in Washington, D.C. Constructed in 1995, the mounds of earth are intended to show the movement of air waves. The Association François-Xavier Bagnoud commissioned the piece.

Prominently featured in the North Campus diag, Alice Aycock’s brilliantly chaotic Summaries of Arithmetic Through Dust, Including Writing Not Yet Printed (class gift of 1933E) was inspired by spiral galaxies and scientific diagrams of the scattering of particles. Conversely, the rusted cast iron material used to form Beverly Pepper’s Triad Ritual (class gift of 1937E) brings modernization and the industrial revolution to mind.

As Kenneth Snelson designed Indexer II, a gift of the Class of 1950E, he had in mind the structural concept of “tensegrity”—structural integrity that balances compression and tension, often through outwardly-pushing metallic tubes. Fletcher Benton’s Tilted Donut with S (class gift of 1956E), however, strives for unbalance and collapse from the pull of gravity, as do many of his other works. Artist Alexander Liberman is known for using industrial objects, and continued this with large sheets of steel in Begob, a class gift of 1945E and the NROTC classes starting in 1942.

The noteworthy Hob Nob is a 32-foot-long, 17-foot-wide twisted aluminum block designed by the Australian artist Clement Meadmore. Before becoming a sculptor, Meadmore studied aeronautical engineering at the Royal Melbourne Institute of Technology. He designed a miniature prototype of Hob Nob in 1992, and, after his death in 2005, the University commissioned the construction of a larger-scale version. James Steward, director of the U-M Museum of Art, has said Hob Nob is “one of the artist’s best pieces” and called Meadmore “one of the more significant sculptors of the second half of the 20th century.” The replica was a gift from Jagdish C. (BSE CE ’63, MSE ’64) and Saroj (MA ’68) Janveja.

Not every sculpture has a connection to engineering. The Wolverine statue, for example, is a life-size homage to the University’s mascot. The statue was a gift of the Class of 2001E and created by Dan Heikkinen, a 1981 School of Art & Design graduate.

In addition to the College of Engineering, North Campus is home to the Taubman College of Architecture and Urban Planning, the School of Art + Design and the School of Music, Theatre & Dance

Learn more about North Campus artwork by clicking on the images below and watching the video slideshow Form and Function.