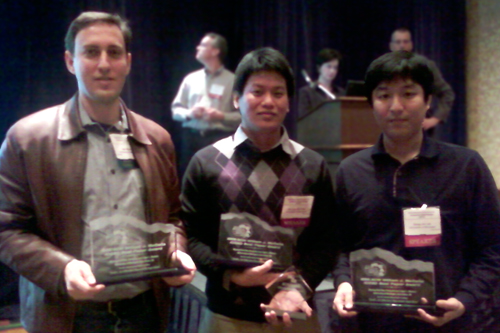 In related news, Kim and Lee also tied for second place in the 2010 ICCAD CADathon.

Prof. Markov and his students have focused recent research efforts on the problem of positioning digital logic gates in multi-million-gate VLSI chips because this positioning impacts chip performance, power consumption and manufacturing costs.

Their paper, entitled “SimPL: An Effective Placement Algorithm,” introduces a new technique that improves on the shortcomings of current algorithms and tools for global placement in terms of speed, solution quality, simplicity and integration with other optimizations. SimPL also lends itself naturally to parallelism on multicore CPUs.

SimPL is a self-contained, force-directed algorithm for global placement that is easier to implement than existing techniques and fits better into timing-closure flows. It maintains lower-bound and upper-bound placements that converge to a final solution. The upper-bound placement is produced by a novel “rough legalization” algorithm. SimPL outperforms competing tools simultaneously in runtime and solution quality.

Prof. Markov researches computers that make computers. He is a member of the Executive Board of ACM SIGDA, Editorial Board member of the Communications of ACM, ACM TODAES, IEEE Transactions on Computers, IEEE Transactions on CAD, ACM J. of Emerging Technologies in Computing, as well as IEEE Design & Test. He has co-authored three books and more than 170 refereed publications.