EECS: Computer Science and Engineering, EECS: Electrical and Computer Engineering
August 12, 2010
Taking first place in acceleration and second place in endurance and autocross, this is one of the team's best international finishes to date.| Short Read
Enlarge

The MRacing team finished an impressive second of 91 teams in the international Formula Student Germany competition, which ended Aug. 9 in Hockenheim.

This is the one of the best international finishes in the team’s history. The students finished first in acceleration, going from 0 to 70 mph in 3.9 seconds. They won second place in endurance and third in autocross.

In charge of the electronics for the car were Jacob Oberlin (BSE Computer Engineering, and current graduate student in Computer Science & Engineering), who was also the Chief Powertrain Engineer, and Nathan Lusk, a current undergraduate student majoring in both electrical and mechanical engineering.

Among Oberlin’s responsibilities were wiring harness construction, engine tuning and data acquisition. He stated, “during competition it was my responsibility to be out on track watching the live telemetry feed on a laptop and radioing the driver if something needed to be changed. We use one of the most advanced electronics control systems in FSAE so it’s a lot to keep track of. Most often I will inform the driver of problems with low fuel or engine temperature so that they can change their driving style to fix the problem.”

For example, during the endurance race in Hockenheim, Oberlin told the second driver Garret Huff to turn up the traction control in order to conserve fuel. They finished the race with approximately 0.5L of fuel left out of a 7L tank.

Nathan Lusk takes on the role of team captain for the 2011 vehicle. The team leader has responsibility for organizing the entire team to get the car built, as well as sponsor relations.

The MRacing team builds its car from the ground up and competes in two major events each year. In May, the team had its best finish in 16 years at the SAE Collegiate Design Series competition at Michigan International Speedway, finishing second overall and setting an acceleration record. 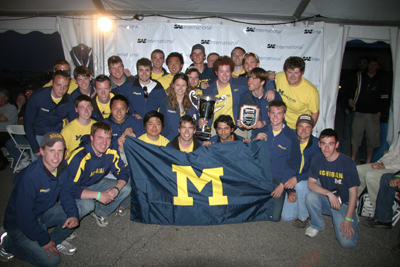