EECS: Computer Science and Engineering, EECS: Electrical and Computer Engineering
June 23, 2010
The Autonomous Surface Vehicle Competition is a student robotics competition in which teams race ASVs of their own design through an aquatic obstacle course.| Short Read
Enlarge 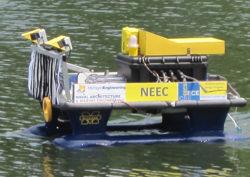 Michigan’s Autonomy team took first place at the 3rd International Autonomous Surface Vehicle Competition conducted by the Association for Unmanned Vehicle Systems International and the Office of Naval Research, held June 10-13, 2010 in Virginia Beach, VA. There are actually 2 first place awards, one for static judging (based on the technical paper, webpage, and presentation) and the other for the actual race. Michigan took first in both!

The Autonomous Surface Vehicle Competition (ASVC) is a student robotics competition in which teams race ASVs of their own design through an aquatic obstacle course. This involves littoral area navigation, channel following and autonomous docking. This is typically done with computer vision, multi-sensor fusion techniques, proactive and reactive path planning, and machine learning approaches using embedded systems within the vehicle. 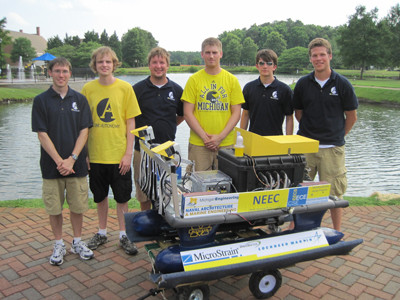 With electrical and computer engineers figuring heavily in this year’s team, they were able to come in ahead of University of Central Florida (two-time defending champion), University of Rhode Island, Virginia Tech, and US Naval Academy, all of which received prizes as well. 13 schools took part in the race.

The was the first year the team had sufficient numbers to accomplish their goal. Ryan Wolcott, the team’s electrical lead, stated, “Once we built up a decent foundation of EECS students, everything started to fall into place. We had the ability, unlike several other teams, to log practice run data and reuse it to fully stress test our autonomous platform; we could go through several different scenarios and software changes and see how the vehicle would respond. With having so many tools to succeed, we just needed people that could help out and contribute.” 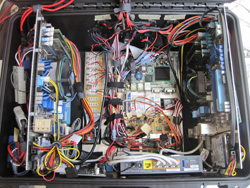 “EECS students combined to design and assemble the electronics box, wire the entire vehicle, and develop software for our autonomous platform. For the electronics box, we had to mount our electronics hardware and computers, and safely wire both power and communication lines to all pieces of hardware. EECS students also developed all of the software for the boat; we had to write all of our low-level drivers that interface with a GPS, compass, IMU, SICK LIDAR, and cameras. We had to pool all of these sensors together to create a map of the environment that our route planner can use to make high-level decisions based on mission requirements. Once our route planner has established waypoints, a PID control system is used to successfully navigate the vehicle towards its goal.”

This is an unmanned vehicle, so no one is controlling the vehicle from shore. It needs to navigate the cones, pick up a ring, and deliver it to a volcano in Mordor (Lord of the Rings). Only Michigan made it even close to the land of Mordor!

This year’s boat is completely new, and weighed 110 lbs., the maximum allowed before deductions are taken. There was a certain amount of drama in the final run when Michigan’s boat was tied up at a buoy, but it did finally manage to free itself in time to continue the race.

The team put a significant effort this past in increasing student involvement, and moving from a loose group of students working on the vehicle to a tightly organized team with official status in the College of Engineering. The team was supported by faculty advisors Dr. Ryan Eustice (EECS and Naval and Marine Engineering, NAME) and Dr. David Singer (NAME).

We look forward to next year’s contest!