Ambiq Micro: Taking a startup to the next level

EECS: Electrical and Computer Engineering
June 7, 2010
“Imagine a microprocessor so tiny and long lasting that it can be implanted in the eye of a glaucoma sufferer to measure the progress of the disease."| Short Read
Enlarge 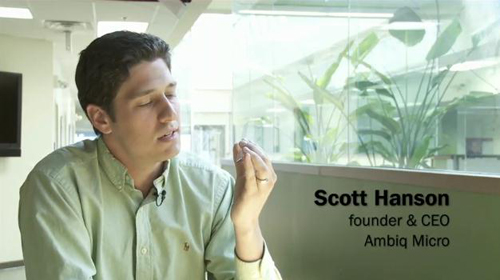 Ambiq Micro, a new startup company based on microchip technology that has been in development for the past six years at U-M, has been attracting the attention of potential investors at recent business plan competitions. Ambiq Micro was co-founded in 2009 by Scott Hanson (BSE MSE PhD EE ’04 ’06 ’09) and his thesis advisors, Prof. Dennis Sylvester and Prof. David Blaauw.

Ambiq took first place in the Michigan Business Challenge back in February, 2010, a feat that was reported in the New York Times. More recently, Hanson and U-M business students David Landman and Philip O’Niel (both MBA graduates from the Ross School of Business) took their elevator pitch and presentation to the 2010 Rice Business Plan Competition (RBPC), where they took home $54K in prize money by earning the DFJ Mercury Tech Transfer Investment Prize of $50K, and taking fifth place overall in the competition. Ambiq competed against 42 teams from around the world, pitching their technology business plans to more than 200 judges.

“Imagine a microprocessor so tiny and long lasting that it can be implanted in the eye of a glaucoma sufferer to measure the progress of the disease,” wrote Josh Hyatt in CNN Money.com. “That idea is what got CEO and co-founder Scott Hanson excited about commercializing ultra-low-power, minuscule microprocessors he developed with his professors.” 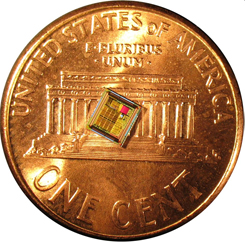 IMAGE:  The newly fabricated commercial prototype, currently being tested, is an ARM Cortex-M0 processor with a wide range of peripherals.

From that spark, Hanson helped develop a technology ideally suited for very small devices with a wide range of potential applications. These include sensors for smart buildings and smart homes, sensors for industrial monitoring, body-worn medical electronics, next-generation smart credit cards, and a growing list of ubiquitous computing applications.

“Ambiq Micro is leading the way towards ubiquitous computing,” said Phil O’Niel in the one-minute elevator pitch at the RBPC, “where microcontrollers are embedded in everything from the clothes that we wear to the paint on the wall. Unlike the processor wars of the last decade, it’s not going to be the company with the fastest chip, but the company with the most energy-efficient chip that’s going to win the day. To capitalize on this opportunity, Ambiq Micro has developed and will sell the world’s most energy-efficient microcontroller, consuming orders of magnitude less power than what’s currently on the market today.”

The company’s first research prototype is currently being tested, putting this new company on track for finding their first commercial customers.