Awards and slaying of the dragon at St. George’s Day feast

EECS: Electrical and Computer Engineering
April 20, 2010
St. George's Day was initiated in 1987 as a tribute to our students from the faculty.| Short Read
Enlarge 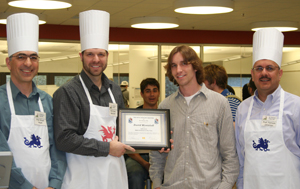 Prof. David Wentzloff was honored with the 2010 HKN Professor of the Year Award at St. George’s Feast Day, Monday, April 19, 2010. This is an annual award voted on by members of Eta Kappa Nu, the honorary society for electrical and computer engineers. 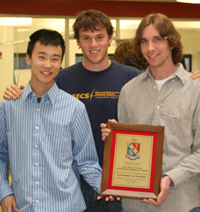 The Beta Epsilon Chapter of HKN was itself honored with the Outstanding Chapter Award for 2008-09. This is the fifth year in a row that the U-M chapter received this award, and is a wonderful tribute to the organization, activities, and good works that this chapter is known for. 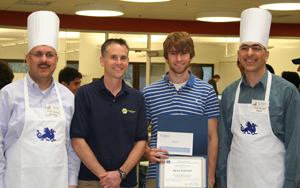 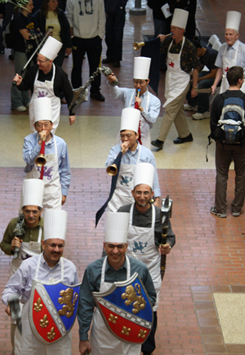 St. George’s Day was initiated in 1987 as a tribute to our students from the faculty. St. George was born in 270, and after his death in 303, was remembered for his bravery in battle. Many miracles and legends were attributed to him, including the famous slaying of the dragon. 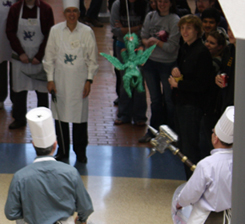 This year, several faculty attacked the dragon – who was threatening to eat all the food – and it was finally taken down by Prof. Peter Chen’s fearsome blow!