EECS: Electrical and Computer Engineering
January 23, 2010
The PECASE is the highest honor bestowed by the U.S. government on outstanding scientists and engineers beginning their independent careers.| Short Read
Enlarge 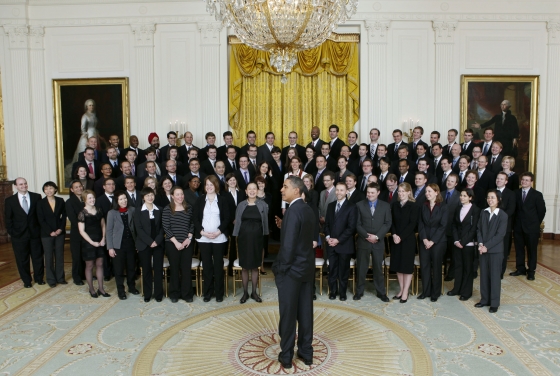 Prof. Anthony (Tony) Grbic, assistant professor in the Radiation Laboratory, was awarded the highly prestigious Presidential Early Career Award for Scientists and Engineers (PECASE), announced July 9, 2009 by The White House. The PECASE is the highest honor bestowed by the U.S. government on outstanding scientists and engineers beginning their independent careers. Tony joined U-M in 2006 after receiving his M.A.Sc., M.A.Sc., and Ph.D. degrees in electrical engineering from the University of Toronto. 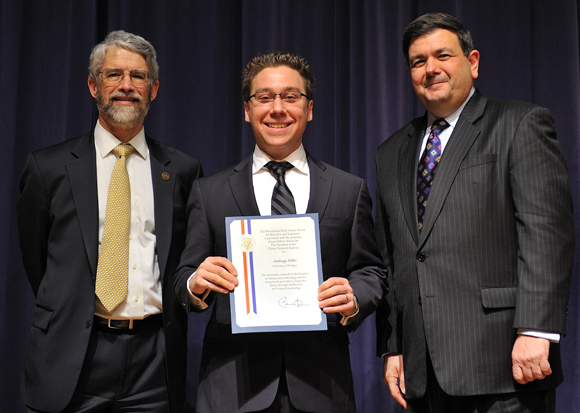 He is a pioneer in the field of electromagnetic metamaterials, publishing highly influential papers even while working on his dissertation at the University of Toronto. His more recent work in this area is focused on the development of a special class of volumetric metamaterials which can overcome the bandwidth and loss limitations of current metamaterial designs. The superior performance of these metamaterials will allow them to be integrated into practical microwave focusing and antenna systems.

He is now breaking ground in a new area that is of great interest among researchers, near-field superlenses, by pursuing an entirely new approach to manipulating and focusing the electromagnetic near field, which relies on modulated grating-like surfaces referred to as near-field plates (NFPs). NFP’s hold promise for a number of areas including high resolution probing devices, quasi-optical and optical components, devices for wireless non-radiative power transfer, as well as antennas and nano-antennas. In this work, he is actively collaborating with physics professor Roberto Merlin.

Prof. Grbic has received an AFOSR Young Investigator Award and an NSF Faculty Early Career Development Award. He is very active in professional societies, and is already a frequently invited speaker at professional conferences and symposiums. He teaches courses in introductory Electromagnetics, senior level Radiowave Propagation and Link Design, and graduate courses in Electromagnetic Metamaterials.

The PECASE Awards are intended to recognize some of the finest scientists and engineers who, while early in their research careers, show exceptional potential for leadership at the frontiers of scientific knowledge during the twenty-first century. The Awards foster innovative and far-reaching developments in science and technology, increase awareness of careers in science and engineering, give recognition to the scientific missions of participating agencies, enhance connections between fundamental research and national goals, and highlight the importance of science and technology for the nation’s future.

“It is a great honor to have been selected,” Grbic says. “The award will provide my research group with even greater research freedom and opportunities to pursue topics in the field of metamaterials. This research area is rather new and a lot of fundamental work remains.”