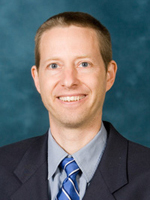 Nonlinear harmonic generation is widely used to extend the emission wavelength of laser sources. These devices typically require high peak powers to generate sufficient nonlinear optical response. Tal Carmon recently demonstrated continuous-wave, visible emission from a silica microresonator on a silicon chip by third-harmonic generation, while consuming less power than that of a typical laser pointer. This visible emission was achieved via multi-recirculation of light that enhances the nonlinear interaction. Prof. Carmon plans to similarly exploit multiple recirculation of light in order to develop a new type of emitter that will operate in the ultraviolet range.

Prof. Carmon joined the department in 2007. His research interests include photonic-MEMS, visible on-chip emitters, and harnessing radiation pressure for opto-mechanical applications. His group recently demonstrated experimentally photonic MEMS vibrating at rates never reported before. He is author of the patent, “Emission from a Photonic Device by Multi Harmonic Generation.” Prof. Carmon teaches EECS 434: Principles of Photonics, and EECS 539: Lasers.

The AFOSR YIP fosters creative research in science and engineering, and is open to scientists and engineers at research institutions across the United States who earned a doctorate or equivalent degree in the last five years and show exceptional ability and promise for conducting research. Recent competition for these awards has been intense, with only 13-19% of proposals being funded in recent years.

The AFOSR invests in long-term, broad-based research in aerospace, chemical and material sciences; physics and electronics; and mathematics, information and life sciences, with a goal of creating revolutionary, scientific breakthrough, enabling the Air Force and U.S. industry to produce world-class, military significant and commercially valuable products.

News: Toroid of many colours