EECS: Electrical and Computer Engineering
August 21, 2009
As one of the only non-mechanical engineers on the team, Oberlin was responsible for all of the electrical systems on the vehicle.| Short Read
Enlarge 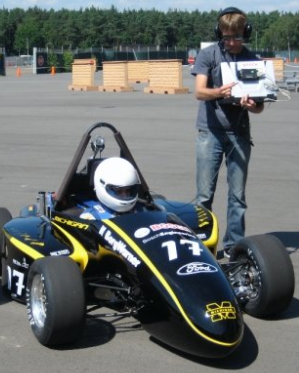 IMAGE:  Jacob Oberlin, standing next to the car that competed in FSG

Jacob Oberlin, standing next to the car that competed in FSG:

“Ever since I was a kid I’ve been trying to put motors on anything with wheels,” said Jacob.

Michigan’s MRacing team recently competed in the largest student competition of its kind, the Formula Student Germany (FSG) competition, held August 5-9, 2009 in Germany. They finished an impressive fifth among 78 international contenders, the best showing at FSG by a North American team. Jacob Oberlin, the electronics group leader and senior undergraduate student in computer engineering, was responsible for all of the electrical systems on the vehicle. He was assisted this past year by Nathan Lusk, who will take over next year as electronics group leader.

As one of the only non-mechanical engineers on the team, Jacob has a huge responsibility! He is ultimately responsible for all of the electrical systems on the vehicle. “From dash board displays to engine position synchronization sensors and trigger wheels,” said Jacob, “I am responsible for every wire, sensor, and controller on the car.”

Everything on the engine is computer controlled (fuel injectors, ignition, pressure and temperature sensors, closed loop fueling, magnetic position sensors), and it is his job is to wire the motor in such a way that it can be adequately controlled. Part of this job is to calibrate the controller so the engine runs properly. He tunes for power, fuel economy, and engine life.

Finally, after wiring the data logging systems, he interprets the data and communicates to the driver any adjustments that need to be made. “I have a radio link with the driver to let them know if they need to adjust the traction control settings, slow down because the car is overheating, or shut the car down immediately due to a loss of oil pressure. Reliability is a huge factor in Formula SAE, and the live telemetry is something we do that really improves the reliability of our car,” explained Jacob.

Each year, the team builds a new car completely from scratch, so part of Jacob’s job also includes some welding. Along with a passion for high performance cars, he came to the team with experience and innate ability in this area, being pushed to higher and higher levels of welding by his high school welding teacher.

Nathan joined the team this past academic year, and will work together with Jacob next year as he takes on the role of electronics group leader. He will also manage the team’s website, and act as treasurer. Oh yes – and he’s done some welding also!

There are nine competitions available for the team to race in, including Michigan. MRacing always participates in the Michigan race, the biggest in the U.S., and travels to one foreign event each year. This year it was to Germany to attend FSG, the biggest event in the world. Their primarily undergraduate team is up against teams comprised largely of graduate students.

Jacob is currently completing his internship at NASA JPL, and will remain at Michigan one more year to earn his Master’s degree. He plans to work on electrical design in Formula 1, or work on a professional race team as vehicle electronics system engineer.