EECS: Electrical and Computer Engineering
July 2, 2009
Senior has made contributions to electromagnetic and acoustic scattering and to the development of analytic and numerical techniques.| Short Read
Enlarge 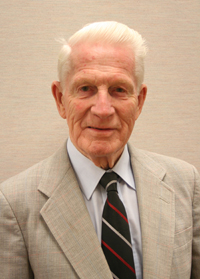 Professor Emeritus Thomas B. A. Senior has been awarded the 2010 IEEE Electromagnetics Award, “For significant contributions to the advancement of electromagnetic diffraction and scattering theories.”

This prestigious award is sponsored by the IEEE Antennas and Propagation Society, the IEEE Electromagnetic Compatibility Society, the IEEE Microwave Theory and Techniques Society, and the IEEE Geoscience and Remote Sensing Society. It is awarded on the basis of outstanding contributions to electromagnetics in theory, application or education.

Prof. Senior joined the department as a research scientist in 1957, and became Professor Emeritus in 1998 after a distinguished career marked by research and teaching excellence, and a remarkable legacy of service to the department and to his profession.

He has made fundamental contributions to the knowledge of electromagnetic and acoustic scattering and to the development of analytic and numerical techniques applicable at low, resonant and high frequencies. He has authored or co-authored 3 books and over 200 publications; some of his articles are now classics in the field.

Named Arthur F. Thurnau Professor in 1990, Prof. Senior also received 2 HKN Faculty Awards, a TBP Outstanding Faculty Award, a CoE Teaching Excellence Award, and a State of Michigan Teaching Excellence Award. In addition, he provided outstanding leadership for 36 consecutive years in the department, first as Associate Director (1962-74) and then as Director (1974-87) of the Radiation Laboratory, and finally as Associate Chair of Academic Affairs (1984-98) for the entire department.

For more than 20 years, Prof. Senior has been a leader in the International Union of Radio Science (URSI). He served on the US National Committee for URSI in a variety of roles for most of this time, including the editorship of the joint Radio Science (1973-79) and USNC/URSI chair (1981-84). He also held a series of international positions, including URSI President. During this period, URSI established itself as the leading international organization in the field of radio science.