EECS: Computer Science and Engineering, EECS: Electrical and Computer Engineering
April 6, 2009
Dongjin's research is a blend of computer science with computer and electrical engineering, and can have a huge impact on upcoming integrated circuits. | Short Read
Enlarge 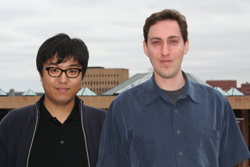 Specifically, the contest focused on the computer-aided design and optimization of integrated circuits for distributing accurate 2GHz clock signals throughout a semiconductor chip, with picosecond precision and subject to power constraints. The contest initially attracted 27 teams (15 from the US and 11 from abroad), though only 9 teams developed working software. IBM researchers evaluated submitted programs on “hidden” benchmarks derived from IBM’s recent system-on-chip designs, and verified results by electrical circuit simulation.

As detailed in the results and contest summary (see especially page 28), the three winning teams were far ahead of other contestants, and each excelled in a different aspect of performance. Dongjin’s program, called Contango, performed most reliably, while the competitors had slightly better results on some benchmarks and significantly worse results on others. Although runtime did not affect contest scores, Contango ran twice as fast as the programs with which it tied for first place.

Prof. Markov advised Donjin on the project, and said of his work:

“Dongjin’s research combines algorithms for combinatorial and continuous optimization, especially computational geometry, with integrated circuit design — it’s a perfect blend of computer science with computer and electrical engineering, and can have a huge impact on upcoming integrated circuits. While traditional algorithms typically optimize a well-defined closed-form objective function, Dongjin found that the performance of a clock network is difficult to approximate by analytical formulas with sufficient accuracy. Therefore, his software first builds a conservative initial circuit, and then improves it by invoking the circuit simulator many times and carefully analyzing the performance numbers returned.”