EECS: Electrical and Computer Engineering
April 28, 2009
The building itself was recognized at the Annual Masonry Awards Program for its exterior, which "emulates an abstract composition of integrated circuits".| Short Read
Enlarge 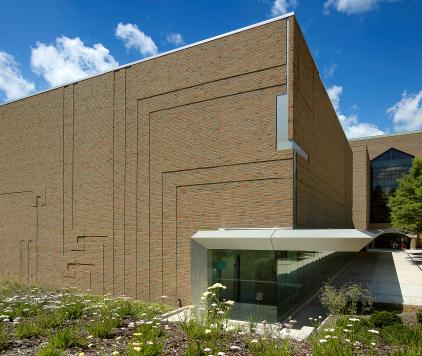 Not only is award-winning research being done inside the Lurie Nanofabrication Facility (LNF), the facility itself is being recognized for its design and structural achievements.

Most recently, the LNF was honored at the 34th Annual Masonry Awards Program for Excellence in Masonry Design with an award in the category of Continuing Education. Sponsored by the Masonry Institute of Michigan, this award was established to encourage and recognize excellence in masonry design. The Fall 2009 issue of CAM Magazine, the official publication of the Construction Association of Michigan, will highlight the facility as one of the 12 most outstanding construction projects in the previous year. 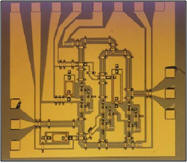 The exterior brick work of the LNF “emulates an abstract composition of integrated circuits, expressing the work taking place inside through the brick outside,” [1] stated George P. Karidis, lead designer at SmithGroup Inc., the firm that designed the building. The project expanded the LNF from 4,500 to over 12,500 square feet (backed up by an additional 38,000sf of new infrastructure) of state-of-the-art class 10/100/1000 and 10,000 cleanroom facilities. The construction was led by SmithGroup (architect, engineer) and Skanska (construction contractor).

Those familiar with the facility give much credit for the success of the design and the overall engineering of the building to a staff trio in Electrical and Computer Engineering known simply as “DDT”. These are Dr. Dennis Grimard – LNF Managing Director, Dennis Schweiger – LNF Facilities Supervisor, and Tim Brock – LNF Operations Supervisor. Their combined experience with the LNF and its predecessor, the Solid-State Electronics Laboratory, tops 50 years.

“Without question, the final success of the LNF is due in large part to the vision, dedication, and attention to detail of Dennis Grimard, Dennis Schweiger, and Tim Brock,” stated Khalil Najafi, Schlumberger Professor and Chair of Electrical and Computer Engineering and Director of the National Nanotechnology Infrastructure Network. “Our current facility ensures that Michigan will remain home to one of the best nanofabrication facilities in the nation for the foreseeable future, with far-reaching impact on healthcare, the environment, energy, and national security through the applications it spawns.”

“A Rust Belt Oasis, the University of Michigan Is Spending Billions to Grow,” by Keith Schneider, December 30, 2008, The New York Times.

The Lurie Nanofabricatoin Facility – A Beacon for Michigan – click here for several articles published about the facility surrounding its dedication April 2008.