EECS: Electrical and Computer Engineering
April 21, 2009
The competition sought solutions for a better way for the deaf and hearing-impaired population to appreciate music.| Short Read
Enlarge 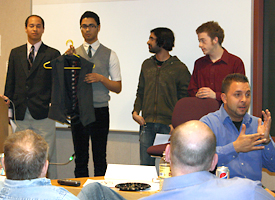 A competition called Feel the Music, sponsored by the Deaf Performing Arts Network (D-PAN) and the College of Engineering Center for Entrepreneurship, sought solutions for a better way for the deaf and hearing-impaired population to appreciate music.

The competition and resulting projects demonstrate how science and engineering are vehicles to improve life for others, in this case the hearing-impaired and deaf population. Joel Martin, co-founder of the Deaf Performing Artists Network, was thrilled with the results, stating, “You guys have really met the challenge. I�m absolutely floored by all the time you spent. Every group has, at heart, a good idea.”*

The winning entry, called Team Thumping Threads’, consisted of a specially designed vest that causes one’s spine to tingle in response to sound waves. The team that created this unique electronic vest was made up of five students, including Stewart Randolph who designed the vest, master of media arts student Robert Alexander, Chris Conover, Matthew Rose, and undergraduate student Rishi Daftuar who majors in electrical engineering and performing arts technology. 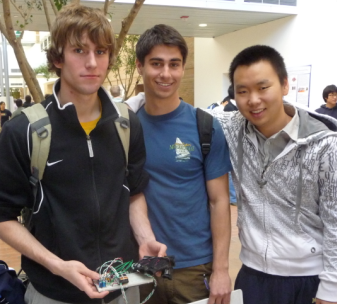 The second place team was comprised of second year electrical engineering students Ryan Garrone, Mike Huang, and Steven Joseph. Their project, called Muted Music, consisted of an electronic “glove” that provided vibrations in specific patterns based on the rhythmic pulse and musical pitch. As second year students, they had little prior experience with the technology. “It was overwhelming at first,” stated Steve, “but we figured out what to do piece by piece.” Some of the things they learned were digital signal processing and computer science, as well as everything about the Texas Instruments chip that they used. Ryan summed up the experience, saying, “it was a great project that allowed us to experience the many opportunities that electrical engineering will have to offer in the future.” 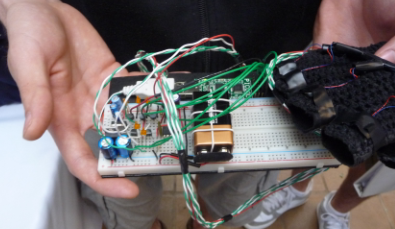