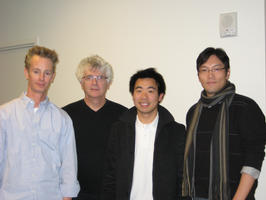 EECS graduate students Mark Woh and Sangwon Seo, and Professors Scott Mahlke and Trevor Mudge won the Best Paper Award at the 41st International Symposium on Microarchitecture for their paper entitled, “From SODA to Scotch: The Evolution of a Wireless Baseband Processor.”

This paper describes a commercial prototype processor that targets wireless baseband processing for the next generation of cellular phones. Current mobile computer systems consist of a variety of general-purpose processors, digital signal processors, and hardwired accelerators to deliver high-performance signal processing on sub-Watt power budgets needed for cell phones.  Ardbeg (named after a brand Scotch Whisky) takes a different approach by providing a fully programmable multicore system that delivers a cost effective and flexible solution by executing a wide variety of wireless protocols in software – GSM in Europe, CDMA in the USA and some parts of Asia, and 802.11 in coffee shops.  High-performance is achieved by providing a 512-bit 32-lane single-instruction multiple-data (SIMD) datapath combined with an efficient SIMD shuffle network to permute data as the core execution engine on each processor.  This paper shows the architectural evolution of going from a research design previously done at U-M in 2006 code named SODA to the Ardbeg commercial prototype, including the goals, tradeoffs, and final design choices.