University of Michigan Office of Technology to showcase inventions 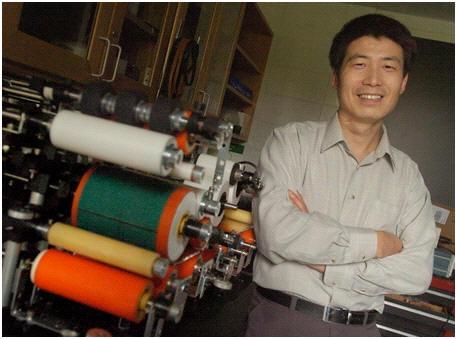 Jay Guo, an associate professor of electrical engineering at the University of Michigan, stands next to a prototype of a machine he created that can “write” on microchips and help produce brighter and more efficient LCD displays and improved solar panels.

But look closer, he said, and you’ll see a machine that can continuously imprint tiny computer chips with information nearly as easily as a compact disc burner writes on a CD.

The U-M electrical engineering and computer science professor’s hope is to bring down the cost of making the chips. The same technology can be used to more easily make solar panels and LCD screens.

“We want to perfect this technology and find more and more applications for it,” Guo said. 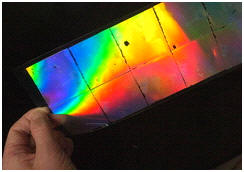 A “nanograting” film from Jay Guo’s prototype microchip imprinting machine creates a rainbow of colors as its microscopic grooves refract the light.

Guo’s computer chip imprinter is one of more than 300 inventions that researchers disclosed last year to U-M’s Technology Transfer office. The tech transfer office is charged with trying to turn ideas at the university into commercialized products or business ideas.

This year, U-M is boasting 13 new startup businesses as a result of ideas it received in the past. It will feature some of them at its 8th annual Celebrate Invention event on Wednesday.

“If you look at the past five or six years, we’ve made a lot of progress,” said Ken Nisbet, executive director of U-M’s Tech Transfer office. “The number 13 is a very impressive number compared to other universities’ with (business) spinouts. It puts us in the same league with Stanford, Georgia Tech … We are probably well within top 10, if not the top five, in numbers of businesses spun out from the university and we are in the Midwest.”